Paterson nun to be honored by a Connecticut university | Paterson Times 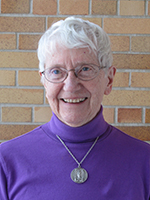 Eleanor Goekler (pictured), a city resident, is set to be honored by St. Joseph’s University in Connecticut for her extensive social work.

Goekler, a nun, who runs a retreat center out of Long Branch, is being honored with the Mary Rosa McDonough Award, a recognition that is given out to a “strong leader who helps others discover their true potential,” according to the university.

After graduating from the university in 1960 Goekler promoted social justice through her missionary work and voiced her concerns against the ills of society. “As part of her work, Goekler has developed and raised awareness of various social issues, including: fair trade and wage equity; peace and justice; and human trafficking,” according to the university.

Goekler in a statement said she was merely doing what had to be done. “To be honored with the Mary Rosa McDonough Distinguished Alumni Award for simply doing what needed to be done with and for those to whom I was sent by my religious congregation is truly a humbling experience,” said the nun.

Goekler is the director of the Stella Maris Retreat Center in Long Branch. Much of her social work was done through the Missionary Sisters of the Immaculate Conception as a Provincial of the North American Province.

The nun stated that the need to help others arose from her home environment, and was further cultivated during her time at the university from which she obtained a bachelor’s of science in chemistry.

“The value of noticing the needs of others and, when possible, working to help them to meet those needs was certainly something learned at home and strengthened by my time at the University of Saint Joseph,” said Goekler.

She is set to be honored on April 25th, 2014 at the Marriott Hotel in Downtown Hartford.