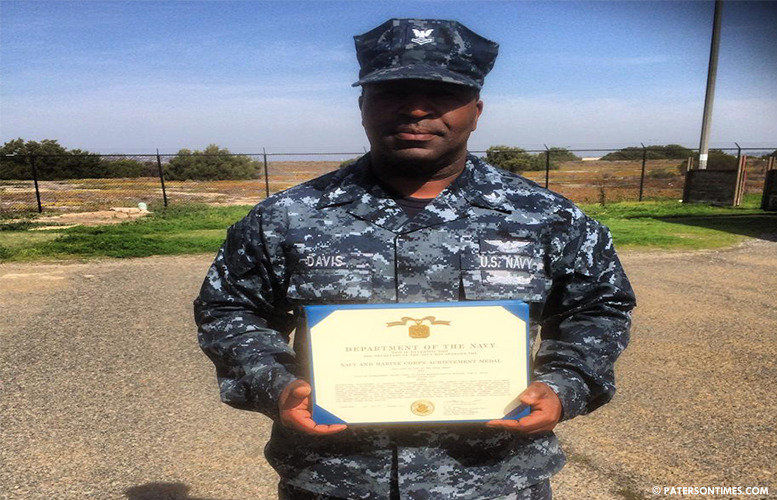 Tyre Davis, city resident moved to Arizona at the suggestion of Marcel Shipp, a Patersonian who played for the Arizona Cardinals. Shipp convinced him to move out to Arizona, while there Davis worked as a substance abuse counselor until a couple of retired navy-men impressed upon him the idea of joining the navy.

“I was a substance abuse counselor there for two years,” said Davis, who moved to that state after finishing college in Western Connecticut State University. While working as a counselor he said he spoke to two men who persuaded him to join the navy. Davis considered the idea with few grains of skepticism. “I spoke to couple of guys that were retired navy and they told me, ‘why don’t you try the navy out,’” said Davis. He joined the navy in 2007.

“He won junior sailor of the year west,” said Joshua Casey, Davis’ superior in the navy. “And that’s pretty much the west region.”

“There’s a lot of command in the west and he’s going up against their best,” said Casey. “He went against some stiff competition with a lot of sailors in his peer group and he beat them out.”

Davis competed against more than 200 sailors in various western naval commands. He beat out North Island, Indian Island, Seal Beach, and Loma, according to his superior.

Davis said it was hard work that got him the recognition. “I know the grind of coming out of Paterson, NJ and working hard,” Davis said. “I’ve been in Paterson my whole life.”

Davis, who was born in Wayne, moved to the city when he was 12-year-old. He attended Passaic County Technical Institute, where he played football. “I went to PCTI, I played football there,” said Davis.

Football continues to bring Davis to the city. He said last year he was in the city with Shipp running a football camp for the city’s youth.

Davis, whose military title is Aviation Ordinance Man Second Class, said he did not know winning junior sailor of the year was such a big deal until he had people come up to him congratulating him. “Not everybody wins this award,” said Casey. “I’d say about 2-percent in the military win out of their whole entire career.”