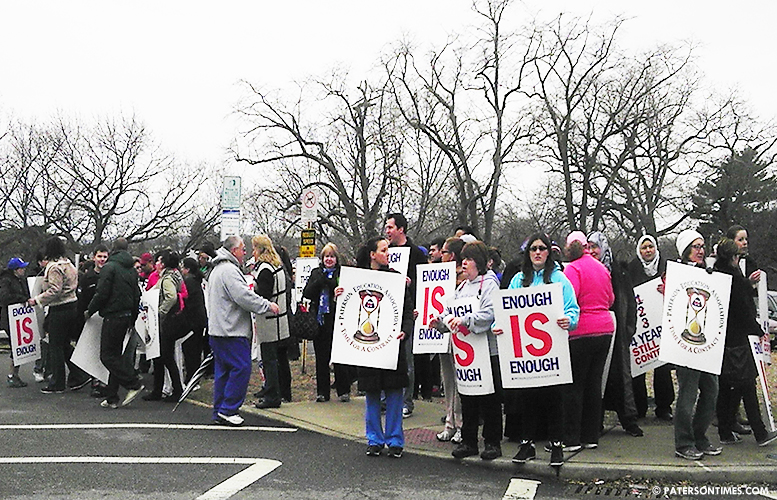 Hundreds of teachers took to the streets on Saturday morning protesting for a contract outside John F. Kennedy High School as district administrators ran a job fair inside the school’s gymnasium.

“We’ve been in negotiations since April of 2010,” said Peter Tirri, president of the Paterson Education Association, the teachers’ union.

District teachers have been without pay increases for the past three years, making the situation extremely frustrating for the union and its members. Recently, a number of teachers have resigned, a direct result of not having a contract, one prominent example was the resignation of a Panther Academy physics teacher.

“I have a master’s degree, and I’m basically stuck making an entry level salary,” said a John F. Kennedy High School teacher. “I’m basically scrapping to get by.”

Other teachers complained their hard work is simply not being appreciated with the district and the state dragging their feet on a contract. “Cockroaches, mice, asbestos, mold, these are the conditions we’re working in,” said a School Three teacher. “We’re very sad. We work in squalor. We come in every day. We do our job the best we can. We take home work every day, and no one cares.”

“These people have been without raises for three years going into the fourth year, and that’s a lot of pressure to put on anybody who has a family and a mortgage,” said Tirri. “It’s a very difficult situation.”

Another teacher asked, “Why is there a job fair when they’re claiming there’s a fiscal cliff and they’re going to lay off people?”

Terry Corallo, district’s spokesperson, said the district has to hire teachers when there are vacancies. “We have to hire if a teacher leaves and there are still many open positions for school staff,” Corallo said. “The reduction is happening at the district office.”

Inside the school gymnasium came well over 800 job seekers, each lining up in front of a table bearing the name of the hiring district school, according to a district official.

Tirri blames the state for the prolonged negotiations. “We recently realized that what was happening was the commissioner and the governor were holding up on negotiation, we think so they could get the Newark settlement done, so that they could throw that stuff on top of us in Paterson,” said Tirri.

One of the condition the state has been pushing through the district is to get rid of a pay increase teachers’ receive after obtaining a master’s degree. “They want everybody at one guide, so there wouldn’t be a credit for a master’s or even a doctorate degree which is an absurdity,” said Tirri. “We’ve resisted most of that stuff.”

Recently though, said the union president, with the resignation of Christopher Cerf, former head of the New Jersey Department of Education, tremendous progress has been made. “We’ve made more progress since he left,” Tirri said.

Despite the arrival of wet weather since they began protesting at 9 a.m. picketers remained with signs and bullhorns demanding a contract as vehicles passing by on Preakness Avenue repeatedly honked in solidarity. “We’re hoping to let the district know clearly that we’ve gathered, we’re fed up with this, we want a contract, and we want it now. We want this thing settled, it seems like it never stops,” said the union president.

“The district is hanging everything on a few little clauses that they know we cannot agree to,” said an union official who did not want to be named.

Despite hardball being played between the district and the union, Tirri is optimistic an agreement will be reached very soon. He said, “We’re going to have a contract by June. We’ve gotten good progress in the past couple of months and we’re hoping that we can solve this in the next couple of weeks.”