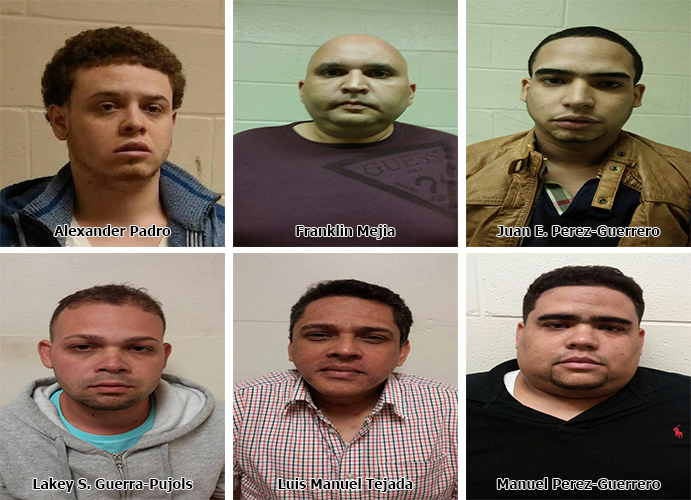 On Saturday, authorities pulled over a 2010 Honda Accord in Saddle Brook. Inside the vehicle were Perez-Guerrero, driver, and Padro, passenger, and “materials consistent with the packaging and distribution of heroin,” according to authorities.

State troopers pulled over a 2003 Ford Explorer that was carrying large amount of heroin in Hackensack that was being driven by Perez-Guerrero with Guerra-Pujols sitting in the passenger seat. “The investigation at the scene led to the discovery of 165 bricks of heroin and .40 caliber hollow point bullets, which were located in a hidden compartment inside the vehicle,” said authorities.

Both stops, say authorities, were conducted as part of a heroin distribution investigation conducted by state police in conjunction with the Drug Enforcement Administration (DEA).

“A search of both residences revealed drugs, weapons, and materials consistent with the manufacturing and distribution of heroin,” according to authorities.

“Due to the tireless efforts of the detectives involved, these drugs will never make it into our communities,” said Rick Fuentes, head of the state troopers. “The success of this operation prevented the distribution of a large quantity of heroin, and removed guns from the hands of criminals.”

“The only way to truly stop the flow of illegal drugs is by actively enforcing our laws, and arresting those involved in its distribution,” said Richard Berdnik, Passaic County Sheriff. “I want to commend the New Jersey State Police, DEA, and our other partners who participated in this significant narcotics enforcement operation.”