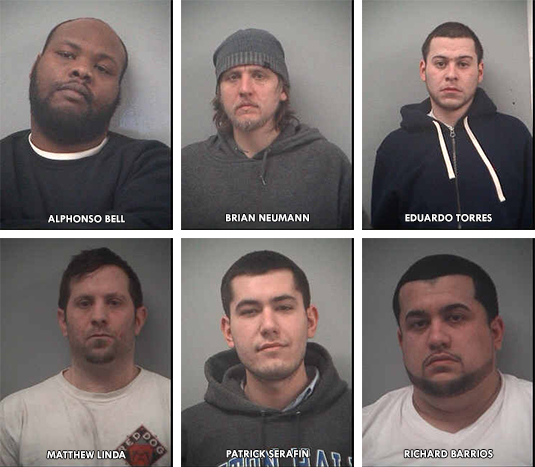 Three heroin buyers and three city dealers distributing large quantities of heroin throughout the city were arrested on Friday after a two-week investigation, announced the Passaic County Sheriff’s Office.

Barrios, a high level, dealer unloaded large quantities of heroin through his proxy Bell to distribute the narcotics throughout the city. Bell would then distribute the packaged heroin on foot to buyers. “Bell would travel on foot between 626 River St. and 77 E. 12th St. in Paterson, making sales,” according to the sheriff’s office.

Bell’s three suburban customers flocked to the city’s illegal drug market to get their fill of heroin in line with a wide-spread epidemic that has engulfed the entire state, according to a 2013 report issued by the state’s Commission of Investigation.

Torres was found in possession of heroin and marijuana. Authorities did not say whether Torres purchased the narcotics from Bell.

“Alphonso Bell was charged with distribution and distribution within a 1000ft of a School for each of the arrests,” said the sheriff’s office. “Bell was also charged for the additional narcotics found at his residence.”

Bell’s supplier Barrios was arrested during a motor vehicle stop at the intersection of Paterson Avenue and Front Street with “350 grams of pure cocaine packaged for distribution and $4,000” inside his rented 2013 Nissan Altima.

Detectives found the money and drugs after towing the vehicle to the sheriff’s headquarter and completing a thorough search of the vehicle.

“The recovered cocaine has a street value over $20,000,” said the sheriff’s office. “Barrios was using a rented 2013 Nissan Altima to distribute large amounts of cocaine throughout the City of Paterson.”

Bail for Barrios has been set at $200,000 with no 10% option, according to the sheriff’s office. Torres was charged and released. Bell remains in police lockup pending bail.