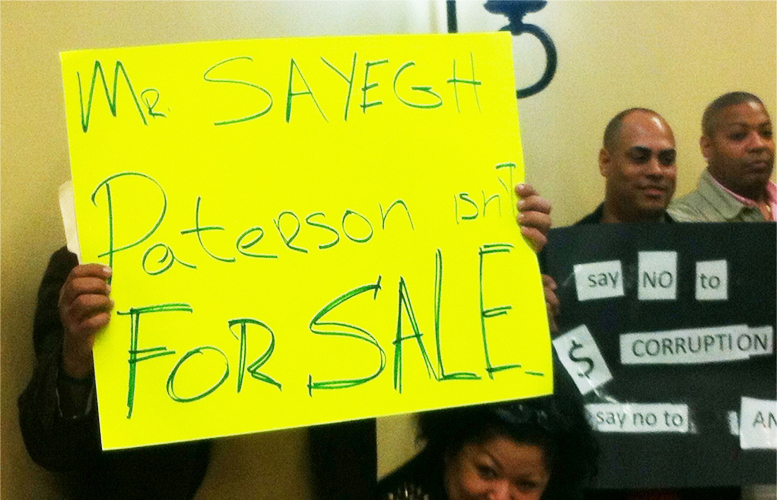 Former mayor Jose “Joey” Torres characterized the lengthy controversy over his sick and vacation payout as a “smear campaign” geared to reduce his chances of reclaiming the city’s mayoralty during the televised meeting of the city council on Tuesday night.

“I fully believe that this exercise was nothing more than a smear campaign in order to smear my candidacy as your next mayor of the city of Paterson,” said Torres speaking before the council.

The former mayor has been in hot waters since last August when his bitter foe Aslon Goow, former 2nd Ward councilman, released a document that showed a $74,000 check was issued to the former mayor during his last week in office.

Since then Torres has been defending himself asserting the payment was legal and appropriate. “The severance payment that I received was approved in a public meeting by the city council much like tonight’s deliberations,” reiterated Torres.

Council members called for an investigation of the payment which yielded a 26-page report by Charles Thomas, the city’s business administrator, that found inconsistencies but refrained from making any judgment on rights or wrongs.

The state found the report inadequate; however, recently the state has said the payments were “potentially unlawful.” The council in March passed a resolution asking the former mayor to repay the entire amount. Torres said he would only repay if the attorney general’s office or the prosecutor’s office found the payment to be inappropriate.

“This all started because of a rumor that I was planning to run for mayor,” said Torres.

Torres said he hired a law firm to get to the bottom of the matter. “I hired the law firm of Scarinci and Hollenbeck to further investigate this matter and request a meeting with all parties involved in order to bring this matter to a close,” said the former mayor.

After his three minute remark, the former mayor rushed out of the council chambers, while a group of his supporters unfurled banners and signs targeting Andre Sayegh, council president and mayoral candidate.

Both Sayegh and Torres are contesting for the mayoralty.

“Paterson is not for sale,” read a sign held by one of the roughly twenty supporters lead by Lydia Robles, former mayoral candidate who dropped out of the race after endorsing Torres.

Robles, a 6th Ward residents, demanded answers from Sayegh. “How many contributors have disclosed their contributions to the council and the city of Paterson. Why didn’t you disclose any of the facts before voting on the resolutions?” asked Robles.

“I recused myself because that was a contract,” said Sayegh, while citing Gaeta Recycling company as an example where he refrained from voting on the resolution after the company’s owner contributed to his campaign.

The city has a strong ordinance barring political contributions from contractors but lacks any for developers. “I have filed and disclosed all my donors,” responded Sayegh.

During the past year, the council president accepted contributions from developers prior to voting on development projects.

Last night Sayegh said, “There was no quid pro quo.”

Council members said they were not aware that the council president was taking contributions from developers prior to casting his votes when this paper reported on Sayegh’s practice.