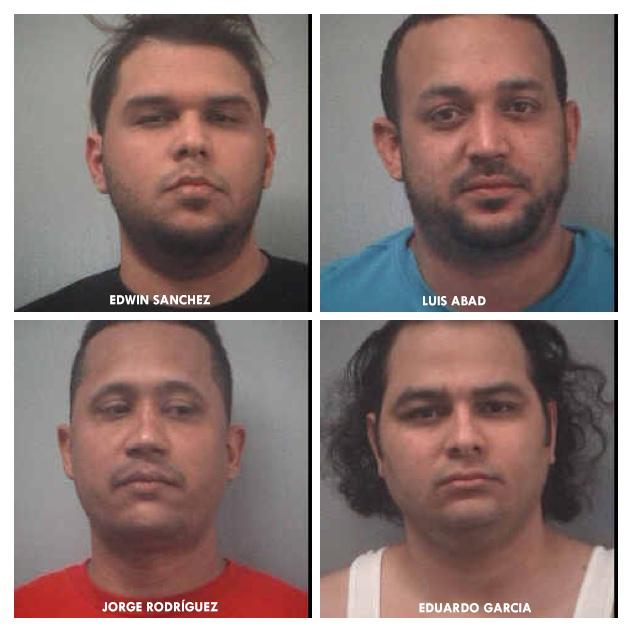 Four city men were arrested on Friday afternoon after sheriff’s officers raided a mid-level drug trafficking organization operating out of an apartment on May Street, announced the Passaic County Sheriff’s Office.

The four city residents: Edwin Sanchez, 21; Luis Abad, 33; Jorge Rodríguez, 36; and Eduardo Garcia, 33, were arrested on Friday at around 5 p.m. after a two week investigation into a suspected drug distribution network based out of the third floor apartment of 53 May Street.

Authorities charged Sanchez and Abad with heroin possession and intent to distribute. The two suspects were inside a vehicle attempting to make a large heroin delivery in the area. As the suspects were traveling through Temple Street and Presidential Boulevard authorities caught up with them and commenced a motor vehicle stop.

“While approaching the vehicle, the passenger (Edwin Sanchez) attempted to flee the scene on foot and a pursuit ensued,” said the sheriff’s office. “After a brief foot pursuit, Garcia was apprehended and found to be in possession of more than 400 packets of Heroin ($4,000 street value).”

Abad and Sanchez were cuffed following the vehicle stop.

Working in tandem with the New Jersey Attorney General’s Office, sheriff’s officers arrested Rodríguez and Garcia charging both with conspiracy to distribute heroin.

The bust termed “Operation May” resulted in the seizure of two vehicles and $3,000 in drug money, according to authorities.

Rodríguez and Garcia were charged and released, according to the sheriff’s office. Sanchez is being held in the city’s police lockup and Abad is pending extradition, according to authorities, because he has criminal warrant out for his arrest from North Carolina, Ohio.

Abad has warrant out for his arrest out of the Paterson and Little Falls, according to authorities. The sheriff’s office said this is an ongoing investigation that will result in more arrests.