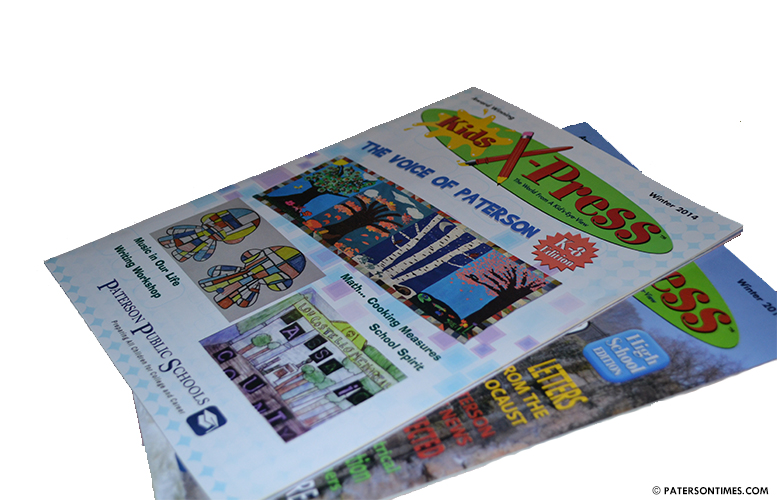 The city’s public school district working in tandem with Kids X-Press has launched a magazine for students to promote literacy.

“Voice of Paterson,” the magazine will be published twice a year in two different editions, one for high school students and another for kindergarten to eight graders.

Last week the district received copies of its premier edition which was delivered by volunteers from the United Parcel Service (UPS) to various city schools.

“Learning is the common theme throughout our premiere edition as many contributors express their own creative ideas,” said Anthony Cavanna, the district’s chief academic officer.

The magazine comes packed with creative pieces drawn out of the minds of students. In the first issue of the K-8 edition of the magazine there’s a profile piece completed by a 5th grade class out of School Seven.

In the piece the fifth-graders profile Pam Munoz Ryan, author of “Esperanza Rising,” a historical fiction about a 13-year-old Mexican girl whose family move to California – the book contains a healthy amount of intrigue, political machination, and murder.

The fifth graders only read an excerpt of the book prior to completing a profile of the author with a brief biography connecting her life to some of her literary works.

The magazine is filled with poems, drawings, puzzles, and images.

The high school edition of the magazine reads much like a news magazine; it begins with a mathematical dialogue between two brothers, one explaining to the other congruency.

Then, there is an article written by a Rosa Parks High School student explaining the usefulness of the district’s phone application: “Users can view district and school news, check out sports, receive important notifications, and even get connected to the district’s tip line,” writes Nia Adams.

Another student from the same high school, Wendoly Mora, dishes out her opinion against the teenage anti-social pastime called “knockout game.”

The Mora writes, “Knockout isn’t a game. It is a vicious attack in which someone targets an innocent stranger.”

Kids X-Press, the non-profit, has as its aim to improve self-expression and confidence of students by cultivating their creativity and showing their names in print.

“At Kids X-Press, we’ve been empowering children for 13 years by providing a platform for them to share their ideas with others — through words and pictures,” read a statement from Nivia Viera, founder and publisher of Kids X-Press. “Teaming up with the Paterson Public Schools around the critically important area of literacy gives youngsters a new, creative way to approach their studies while boosting their self-expression.”

Next issue of the magazine is set for release in June 2014. Students are encouraged to submit their content to the magazine for publication.