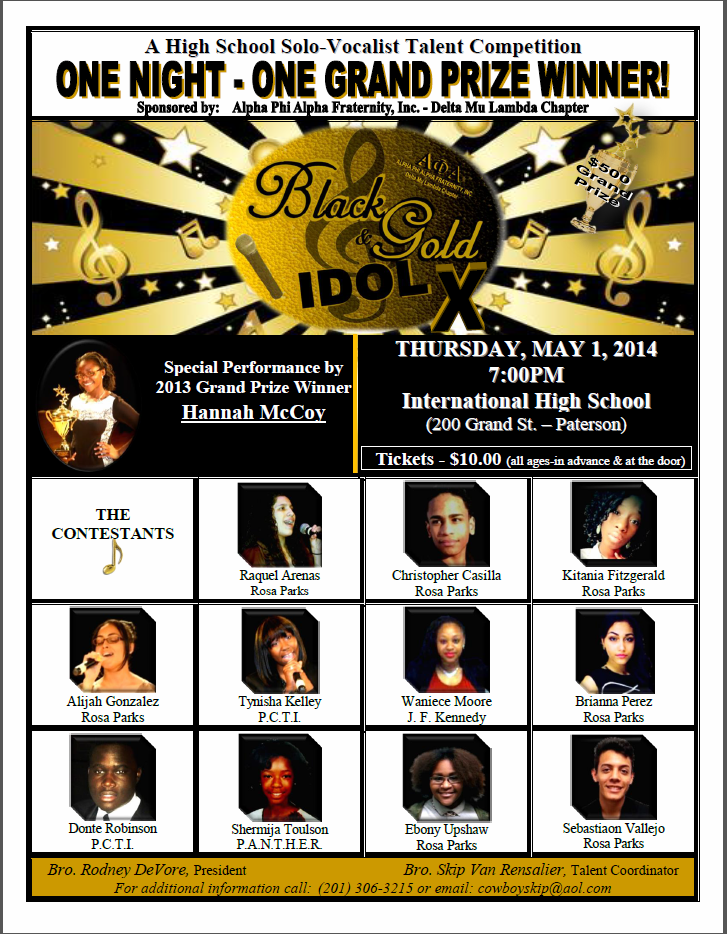 A scholarship talent show is to be held by the Delta Mu Lambda Chapter of Alpha Phi Alpha Fraternity on May 1st at the International High School on Grand Street to raise funds for a scholarship.

“This is the tenth annual competition which is mirrored after the hit reality television show, ‘American Idol,’” said “Skip” Van Rensalier, the show’s organizer.

The show dubbed the Black and Gold Idol will have eleven local high school student singing in front of a panel of judges who then will narrow down the list to the best three.

“This area wide competition exposes contestants to the mechanisms of performing in front of a large crowd as well as getting the opportunity to showcase their vocal talents,” said Rensalier.

The organizer said this is the 10th year the fraternity organized the talent show. Nicole Ortiz, grand prize winner from the 2nd year has gone into the show business and is in the process of releasing her first album, said Rensalier.

“[She] has been showcasing her talent for record companies and recently placed within the top three in the Amateur Night at the Apollo Theatre competition as well as working on her first CD release!” said the organizer.

The show will be held inside the auditorium of the Grand Street high school on May 1st, 2014 at 7 p.m. with tickets costing $10 per person. “All proceeds will go towards the awarding of scholarships to deserving and eligible graduating high school seniors residing in Paterson,” according to Rensalier.