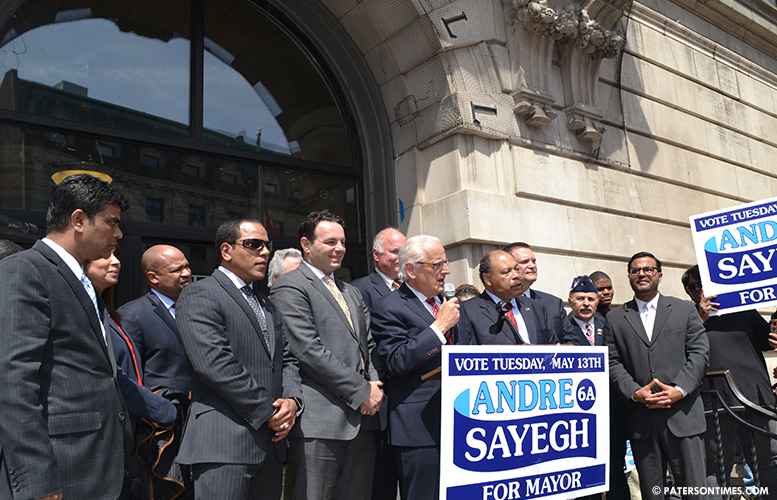 Standing on the city hall steps, in front of a large group of protesters from his opponents’ campaigns, Andre Sayegh, 6th Ward councilman, accepted the endorsements of Bill Pascrell, John Currie, and the tacit approval of Benjie Wimberly.

“Today we’re here for an endorsement for a young man that is full-well qualified to bring Paterson to a brighter future,” said Currie, chairman of the state’s Democratic Party.

“Today we’re going to endorse Andre Sayegh as the next mayor of the city of Paterson!” thundered Currie as the protesters, mainly from Jose Torres’ campaign yelled: “Paterson is not for sale!”

Pascrell, congressman representing New Jersey’s 9th District, began, “I did not come here to speak ill of anybody.” The congressman attempted to settle and quiet the protesters, but they continued.

Seeing mostly Hispanic protester, Pascrell, said, “When this rally is over I go back to Washington and fight for immigration reform, that’s my job and that’s what I’ll do.” The congressman briefly received cheers.

“I think Andre is ready, I think he is capable, and I think he will make a great mayor,” said Pascrell as the crowd booed him.

The congressman said under a Sayegh administration every race will be treated fairly saying, “Fairness isn’t that what we all want?” The crowd continued to booing Pascrell. “We’ll I’m glad you are booing fairness,” remarked the congressman.

Wimberly, who presumably made an appearance to back the 6th Ward councilman, spoke two sentences before stepping away from the microphone. “I realize that we’re one city of 52 nationalities, that we need to move forward, with that I say, let’s move our city forward in 2014,” said Wimberly.

“You know it’s wrong!” yelled Russell Graddy, a prominent African-American restaurateur and ardent Jones supporter to Wimberly. “I’m telling you it’s not right! You said you wouldn’t do it!”

Flanked by two of his council colleagues, who reiterated their endorsements, said, “This election is not about the past, this election is about the future, we represent the future of this city, Councilman Tavarez, councilman Akhtaruzzaman, and myself — a new generation of leadership.”

“What we’re seeing today is a part of the past, where it needs to belong is back in the past,” remarked the councilman. It was not only Torres’ campaign, others campaigns had their representatives at the protest as well.

“I’m proud to be here today to endorse Andre Sayegh for mayor,” said Pascrell. “I think he represents hope for our city.”