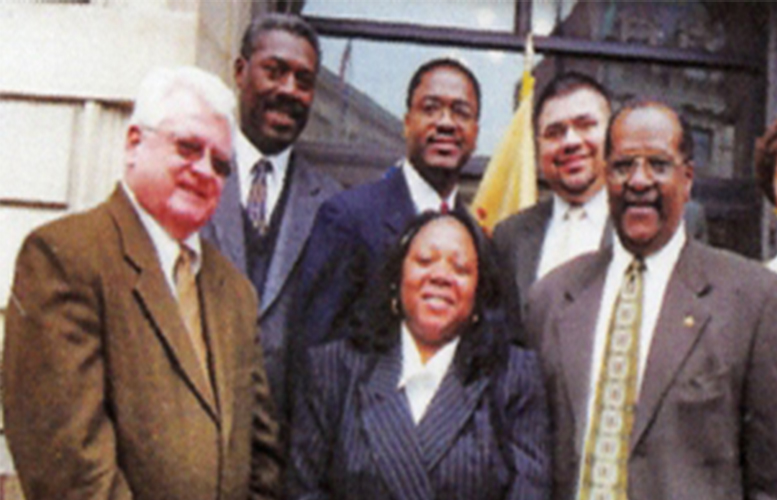 After mixed ruling from the board of trustees of public retirement system and a court judge on whether former mayor Martin Barnes’ family should receive his pension, appellate court judges Susan Reisner and Carmen Alvarez, in a decision issued last Friday, asserted the family should not receive the deceased mayor’s pension because of his bribery conviction.

Barnes on the left side, John Currie in the center.

In 2010, Barnes applied for his pension, the system’s board rejected his application citing the former mayor’s corrupt activities warranted a forfeiture of his pension – Barnes had 12-years of creditable service in the pension system.

Barnes plead guilty following his arrest that he accepted bribes from city vendors (estimated $200,000 and $350,000 in bribes), failed to report his illegal earnings in his tax return,

Barnes appealed the system’s board’s rejection, and received a hearing with the Office of Administrative Law. The former mayor made his case citing his public service history: “employee of the City Housing Authority and the Paterson Board of Education, City Council member, appointee to the Hackensack Meadowlands Development Commission, and Mayor.”

Barnes, the city’s first African-American mayor, cited the success he had as mayor with the “decrease in the crime rate, avoiding tax increases, and starting programs for city youth and ex-offenders.”

During that hearing, according to the decision document, “Instead of taking responsibility for his actions, Barnes testified that the federal criminal charges against him were politically motivated.”

On December 28, 2012, Barnes passed away. The former mayor died before the case was decided. His family continued after the pension.

On March 4, 2013, Leland McGee, an administrative law judge, decided in favor of Barnes. The judge asserted that the former mayor should only forfeit three years of his pension, the period during which he engaged in corrupt activities.

The judge reasoned that because Barnes was now dead, his family ought to receive the pension because they played no role in his illegal activities. And it was also cited that Barnes “mitigated” his corrupt activities with his “imprisonment and the monetary penalties.”

The judge drew an analogy with other cases involving public employees and immoral conduct in which the pension system did not penalize, relying heavily on a case involving a city of Orange police officer: Eugene J. Uricoli.

Later, the case was again before the system’s board, which again ruled against giving the former mayor’s family his pension. It reasoned, “This was no simple lapse of judgment: Mr. Barnes’ criminal scheme spanned the course of three years of unremitting political and social corruption wherein he received valuable illegal gifts from contractors who sought to do business with the City and ultimately received $6,000,000 worth of contracts.”

Despite the conviction, some city residents see the period during which Barnes reigned in the city hall as one of stability and peace. A Republican, Barnes kept taxes low and balanced budgets, leaving behind a surplus — few of the many reasons why residents view his tenure through rose-colored glasses.

The system’s board also said his family benefited “through the gifts he received and the money he saved through their receipt.”

In their opinion Reisner and Alvarez wrote, “The receipt of a public pension is “conditioned upon the rendering of honorable service” and “the Board may “order the forfeiture of all or part of” a pension “for misconduct occurring during the member’s public service which renders the member’s service or part thereof dishonorable.”

The judges tossed out the police office analogy citing the officer merely nullified a traffic ticket issued to a family friend in an isolated incident and did not gain any personal benefit out of it. The two judges citing their own examples upheld the system’s board’s position.

“While complete forfeiture of a pension is a drastic sanction, it was justified here,” wrote Reisner and Alvarez.