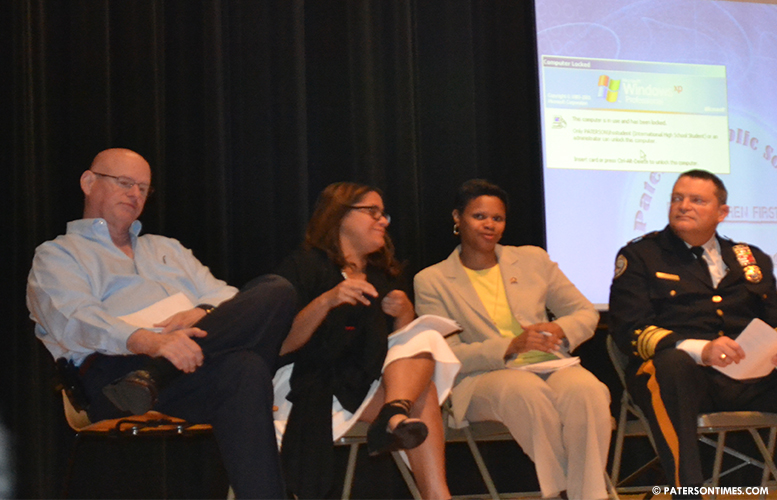 The Saturday morning discussion brought well-over 100 people to the auditorium of International High School. Residents came out to hear law enforcement officials serve up solutions that will stem the tide of violence as the hot summer season approaches.

The city’s police chief, William Fraher seemed to be in agreement, stating that so far this year the city saw 38 shootings. “A lot of the shootings are gang related,” added Fraher.

The prosecutor explained that often one shooting precipitates another. “Lots of times when there’s a shooting, there will be another shooting in three days, in retaliation for the first shooting,” said Valdes.

Two gangs may be at war, and after one side manages to shoot a solider from the other side, a cycle of retaliation follows.

Lori Scott-Pickens, of the Rutgers school of criminal justice, said most of the shootings are done by individuals who have committed an offense and were released from prison. It’s the young ones coming out of the prison with a slap on the wrist that are on the street doing much of the shooting, she said.

Scott-Pickens said some are using rented weapons to commit the crime; others, said Valdes are using a community guns to do the shooting. “You can rent a gun,” said Scott-Pickens. “Accessibility to gun is very easy.”

Richard Berdnik, the county sheriff, while answering a question said some of the guns involved in criminal enterprise are coming from states with loose gun control regimes. “A lot of the huns do come from down south,” said Berdnik.

“So what can we do? All of this sounds heavy and complicated,” Valdes said. Although patterns were identified, solutions were much harder to come by.

Scott-Pickens dispelled the common sense theory that employment, putting drug dealers and troublemakers to work, will address some of the social problems.

She mentioned the large number of shootings that are done by offenders who passed through the revolving door of prison.

“Everybody is not ready for a job, so that’s not the answer,” said Scott-Pickens. “Jobs don’t fix everything.”

“You can’t have $5 an hour skills and hope to make $25 an hour,” Scott-Pickens said. She is alluding to the lucrative drug trade that lures young men and sometimes young women into the illegal drug market with the promise of quick cash.

Scott-Pickens also said therapy does not always work. She suggested a case-by-case application of solutions as the way to move forward. “There is no cookie cutter approach,” said Scott-Pickens.

Valdes pointed to much deeper social problems. “People do what they see, especially in our young people,” said the prosecutor, “if what you see, in terms of how you manage conflict, is that if someone offends you or someone does something to you, then you resort to violence.”

One solution that Valdes, Berdnik, and Fraher mentioned was that communities should trust police and report incidents.

“The law enforcement here is not an enemy, we’re here to solve the problems,” said Berdnik while encouraging residents to utilize his department’s confidential Text-Tip line by texting information to: 274637.

“If you see something, you have to have the courage and forethought to be able to say something,” said Rick Prince, president of Paterson Ceasefire.

With a number of teenagers in audience the sheriff advised them to avoid bad company. “It’s very important who you associate with, it’s very easy to be with someone and be in a situation where a motor vehicle stop is made and you’re with someone and they have something that you have no idea they have whether it’s drugs or gun, they throw it down, the officer stops that vehicle, everybody that’s in that car, if the person does not admit ownership, is charged with possession of whatever it is,” advised Berdnik. “You now have a record for the rest of your life. What does that mean? You want to go for a job, there’s something that you aspire to be, that’s in your record, that’s going to stand in your way.”

The chief defined success in quelling violence as when a child is able to head to the corner store at 11 o’clock at night at the behest of his parent to purchase a quart of milk, and the parent does not have to worry about him returning back home safe and sound.