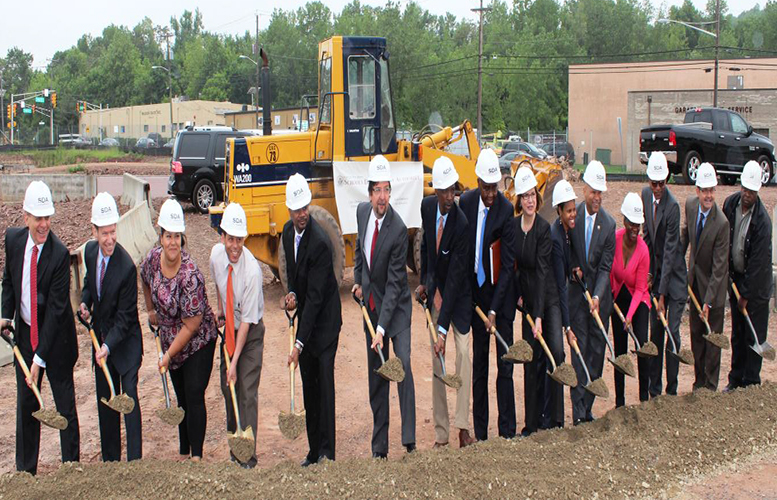 After several setbacks education officials broke ground on the Marshall Street School earlier today hoping to have the school finally completed before the 2016-17 school year.

The new school, located at the intersection of Marshall and Hazel Streets, will have the capacity to house 650 students with 23 regular classrooms, four kindergarten classrooms, a media center, specialized instruction classroom, lab, and a gymnasium. Additionally, it will include a community room and a cafeteria, according to the School Development Authority (SDA).

The school will include a pedestrian bridge over the New Jersey Transit railroad right of way to make the school accessible to students it is designed to serve in the South Paterson section.

“This is a great day for the Paterson community as we mark the start of construction for the Marshall Street Elementary School which will provide 650 students with new seats in a 21st century school,” said Charles McKenna, head of the authority.

During the past year, local school officials and advocates have been clamoring about overcrowding in city schools. “Our school district is seriously disadvantaged because of our many facility needs,” said Donnie Evans, state-appointed district superintendent. “These needs range from overcrowded schools to trying to teach inside school buildings that do not meet 21st Century learning standards.”

The authority issued a $29.3 million contract to Ernest Bock & Sons, a Philadelphia based company, in July 2013 to erect the school. Construction at the company was supposed to begin in the fall of last year; however, the school was stuck in “constructability review” for several months.

In early spring of this year the company began laying new foundation at the site to revive the project that had a previously been halted due to “significant obstacles,” according to the authority.

The agency’s review determined that a two phase construction process would be needed for the school, according to the authority. “The first step, early site preparation, was completed in November 2012. The second phase, construction of the school, was initiated with the required constructability review in June 2013,” according to the release. “Construction activities are anticipated for completion in time for students to start the 2016-2017 school-year in their new school.”