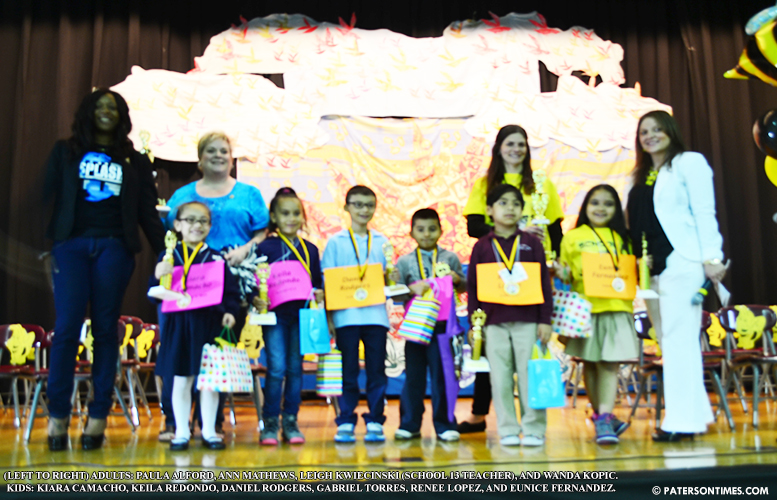 Out of 43 first and second graders competing for two first place slots in the first district-wide spelling bee on Friday morning two students, one from School 13 and the other from Norman S. Weir managed to snatch first place for their respective grades.

The three-hour long contest was held in the gymnasiums of School 24 on Friday morning with second grade winners: Eunice Fernandez, student out of School 13, winning first place. And Renee Lopez, student from School 27, managing second.

In the third place was first grader Gabriel Torres of School 10 and second grader Daniel Rodgers from School 24.

First place winners were handed out tablet computers while runner-ups were given smaller awards, but every student who participated walked away with a medal.

“We are very proud, they are all winners!” said Julie Campo, School 9 teacher, whose two second graders did not make the winning cut.

Although each school was set to place two students into the contest Dale Avenue, which only has first graders, did not have a second grader at the competition neither did Edward W. Kilpatrick and School 10.

“In other districts if you go there, they have these types of educational activities,” said Paula Alford, owner of Nusplash, an online news media site, which sponsored the event. Alford who is a product of the Paterson Public Schools holds that Paterson children deserve the same opportunities as kids in other districts.

“Paterson has a lack of it,” said Alford. “We felt that these kids deserve the same educational opportunities as kids in other districts.”

Alford’s company provided the prizes while a local doctor provided snacks for the participants. “I wanted to empower the community,” said Luis Luna, a local physician. “I am very impressed by the way the whole thing was run.”

While the competition was impressive, teachers were more impressed by the district’s new found impetus to promote traditional ideas in education. Wanda Kopic, language arts and literacy supervisor at the district, credited SRA Imagine It, a reading program developed by McGraw Hill hopes to advance students reading and writing skills, as precocious youngsters spelled words like: believe, employ, and silent, among others.

“The new reading program has enabled us to raise the level of words,” said Ann Mathews, whose first grader, Camacho, won first place. Mathews hopes the contest continues and becomes an annual tradition in the district.

Kopic said she is looking into state and national competitions for city students, but for now she’s encouraging district students to keep expending their vocabulary.