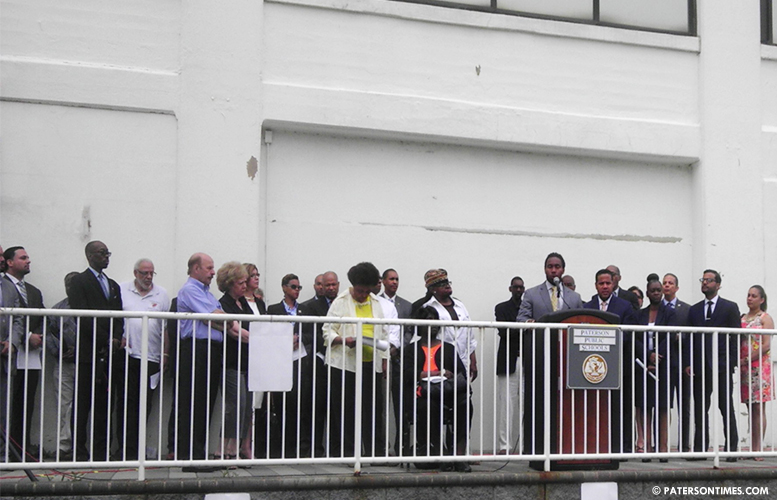 Past and present school board officials celebrated a small victory in a battle to regain local control of the city’s school district on Wednesday afternoon after the state returned local control over district “operations”.

“Today marks, what I believe, is a very important step in a much longer road and process to regaining full control to the City of Paterson,” said Christopher Irving, school board president. “We begin today with the initial step that authorizes this board to have control in the area of operations.”

The state’s Board of Education, voted on a resolution Wednesday morning formally handing over control of operations, one of the five functional areas, to the board. The four other areas: governance, fiscal management, personnel, and curriculum and instruction will rest with the state.

Irving said this would give the school board ultimate authority over facility, safety and security, and staff professional development. Control over operations will also allow the board to enter into shared services agreements with other entities, develop code of conduct for all staff and students, according to the state.

To perceptive eyes the return appears illusory, for much of the power that is being formally handed over to the district has always been exercised by the board, albeit with a veto threat from the superintendent.

Donnie Evans, state-appointed district superintendent, said the handover grants the school board complete control over operations; however, Evans is still able to veto plans submitted by the board even if it deals with matters that fall within operations.

When asked, what if the board submits a facilities plan and the superintendent dislikes it, will he able to overrule the board? Evans said: “I can, but I wouldn’t.”

It was working in tandem with the school board that resulted in the attainment of operations control, said Evans.

Former board members and takeover history

One of the roughly 25 former school board member who attended the event said she is optimistic about the city gaining full control. “It’s a step forward,” said Anna Maria Vancheri, who was first elected in 1987 and was in office before and after state takeover.

On August 7th, 1991, the state took control of the district.

Prior to the state’s takeover of the district a study was completed which found failure at every level in the district. “Since 1984 the Paterson school district has been monitored at levels one, two, and three by the New Jersey Department of Education, and continuously has failed to achieve state certification,” read Evans out of that pre-takeover study. “Indeed, since 1976, the district has never been certified under any system of monitoring.”

Evans highlighted the lack of plan in the district at the time. “Additionally, the district was the only one in the state that failed to develop an acceptable remedial plan,” read Evans.

“The unavoidable conclusion is that the Paterson Board of Education has failed or is unable to provide a thorough and efficient system of education. Since the district has continuously failed or been unable to correct its own problems, this report recommends the creation of a state operated district,” read Evans.

Chauncey Brown, who served in the board beginning in 2002, when Quality Single Accountability Continuum (QSAC), a monitoring and evaluation system for public school districts, was introduced, said he was always against the monitoring system.

“I was not in favor of NJQSAC,” said Brown. “If a board already has local control then you can’t judge by those identifiers.”

You can’t monitor yourself, said Brown suggesting the state is only making it believe it is ceding control while with its monitoring system always remaining in control.

“Things are very very different. It is a very different school system. Those items you’ve heard me read from this report a minute ago no longer exist,” said Evans.

“It’s a good first step after twenty some years,” said Jeffery Jones, the city’s mayor. “In 1976, I graduated from Eastside so that might explain why I didn’t make it to Harvard,” joked Jones to a mostly serious crowd made up of district employees.

The district did not just meet the benchmark to regain control over operations, it also received an 84-percent mark on fiscal management, a function which is likely to be next, according to education advocates. Rosie Grant of the Paterson Education Fund, an advocacy, said “Expectation is getting that next.”

In the days ahead it will become clear exactly what regaining control of operations means for the board, said Irving.