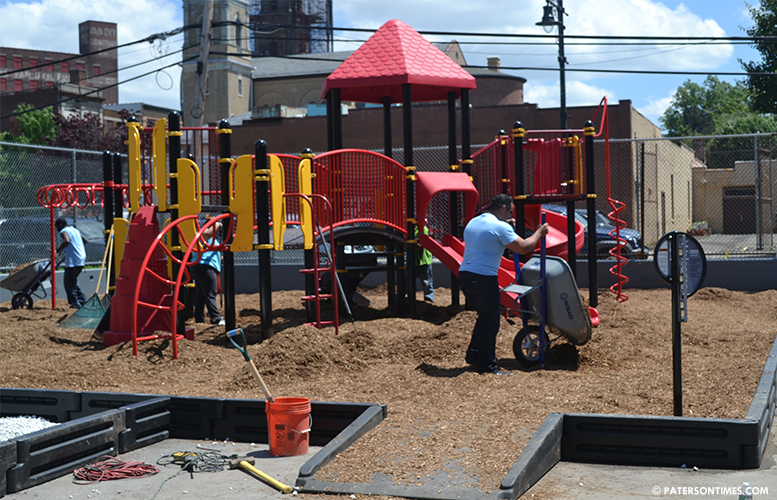 Dozens of volunteers descended on the School Two playground Saturday morning to revamp the school’s playground with a new play area for neighborhood children to utilize during and after school.

“There’s a great need for play areas in the city,” said Eddie Gonzalez of the New Jersey Community Development Corporation (NJCDC). Gonzalez, community outreach director for the corporation, said there are very few inviting playgrounds in the city for children.

I used to take my kids to play at a parking lot near here, said Carlos Velasco, a parent of two School Two students. “It’s great. That’s why I’m helping out,” said Velasco, who volunteered in the effort.

When asked how the corporation figured there was a shortage of decent playgrounds in the city, Bob Guarasci, executive director and founder of the corporation, said, “It’s intuitive.” Guarasci said his mission is to ensure every city kid has a place to play.

Guarasci’s organization has built similar playgrounds, with velocity slides and sitting benches, in his own Community Charter School of Paterson and in School Five. The corporation has been working with the city’s school district to enhance existing playgrounds to entice parents to take their children after school.

Gonzalez said when he passes by School Five on Totowa Avenue he sees the playground the corporation setup at the site fully utilized by neighborhood parents and children. “The kids love it,” said Gonzalez.

Rickita Edwards, a mother of a 5-year-old kindergartener, said there’s not many safe play areas for kids in the city. Edwards said she used to take her kindergartener to play at a nearby park, but stopped after safety considerations.

Edwards said she will bring her child to play at the school’s new playground.

Guarasci estimates the cost for the new playground to be approximately $75,000. Guarasci said two-thirds of the money to fund the installations of benches and slides came from Community Development Block Grant Program issued to the corporation by the city and the rest came from his organization.

Donnie Evans, state-appointed district superintendent, who attended the event, thanked the corporation for its efforts in providing the city’s students with a safe place after school. Evans’ described the partnership between the district and the corporation as one beneficial to the city’s youths.

“This is the village coming together for our kids,” said Evans.