Advocates want breakfast after bell; 30 schools will have it by end of next school year | Paterson Times 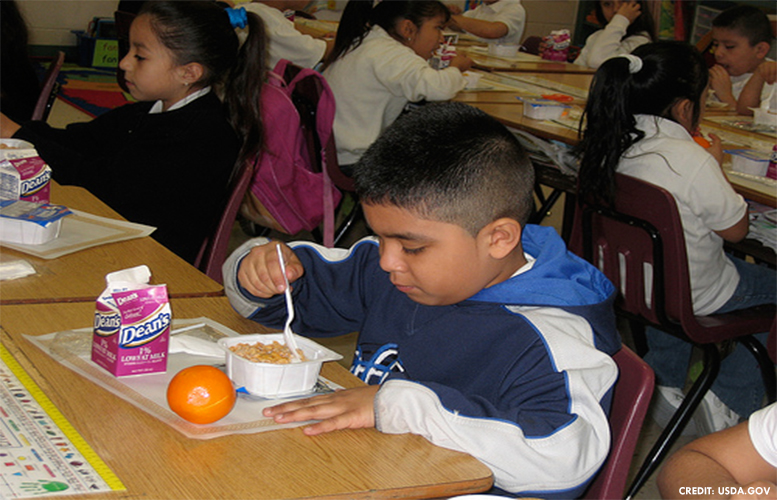 City education advocates in the past weeks have been clamoring for the implementation of a breakfast after the bell program, where students are fed during the first period of class following the bell.

“We have so many kids who are entitled to a free breakfast who are not getting it,” said Linda Reid of the Parent Education Organizing Council (PEOC). Reid said less than half of the students eligible for free lunch don’t take advantage of the current, before the bell, breakfast program.

“Attendance goes up,” said Reid. “Statistics have proven there’s less trips to the nurse’s office.” Reid said a number of city students come into school hungry and others who manage to grab breakfast while en route to school snatch unhealthy snacks like chips and soda from stores.

“They’re bouncing off the walls because they’re full of sugar,” said Reid of students who fill their bellies with unhealthy snacks. “Let them come to the classroom where everyone can sit down and have a nutritional meal.”

In fact, a 2013 study completed by No Kid Hungry, a non-profit group, confirms Reid’s assertions. Out of 21 million students eligible for free lunch nationwide only half take advantage of free breakfast.

Christopher Irving, school board president, said he has visited one of the schools that currently has a breakfast after the bell program. Irving said he was impressed with the program and thought it was beneficial for students. “The benefit outweighs everything else associated with the program,” said Irving. “I’d love to get it expanded to more schools.”

The district began experimenting with the idea less than two years. The newness of the experiment makes assessment of the program and the purported benefits in improved attendance and test scores difficult to measure.

The district has plans to expand the programs to other schools. “We started last school year at School 8,” said Corallo. “Will be expanding to have a total of 30 on board by end of upcoming school year.”

When asked why students cannot make use of the current breakfast program which opens every school day at 7:30 a.m., Irving said: “That’s provided that parents wake their kids up early and drop them off on time.”

Reid said by the time some of the students show up for school the program usually has closed its doors for the day. Reid further added that the current breakfast program, where students are able to walk into the school before the day begins for a meal, is simply not serving enough students.

Irving concurred with Reid, saying only a small number of students make use of the existing breakfast program. “I think it’s a very low number of kids who utilize that program,” said Irving.

An assemblyman from Burlington County wants to increase the number of students participating in school breakfast programs throughout the state by mandating needy districts like Paterson that have 40-percent of their students eligible for free lunch implement an after the bell breakfast program.

Assemblyman Troy Singleton, who represents New Jersey’s 7th Legislative District, introduced a bill in the state’s assembly to mandate high poverty districts to have in place a breakfast after the bell program.

“One of the things we’ve noticed is that many of our students from some of the toughest socio-economic areas of our state were not able to enjoy breakfast, thus not giving them the fuel to have a productive day in school,” said Singleton.

Singleton’s bill which was introduced in January has passed through the assembly with overwhelming support. The bill is currently before the state’s senate, where some of the language of the bill has been altered from “mandate” districts to “encourage” in implementing a breakfast after the bell program.

“There was approximately 320,000 children who missed out on breakfast in school,” said Singleton citing state figures from last school year. “We know it’s a significant number of kids and we want to bring that number down.”

Reid said the program will not cost anything to the district, for it will be reimbursed by the federal government. “The money would not come out of the actual school budget,” said Reid. “In fact, additional money will come in to supplement that program.”

Irving stated that he too would like to see a decrease in the number of students skipping school breakfast. Irving said the breakfast after the bell program will ensure every student a free, healthy breakfast. “This guarantees that 100-percent of kids will be able to eat,” said Irving.