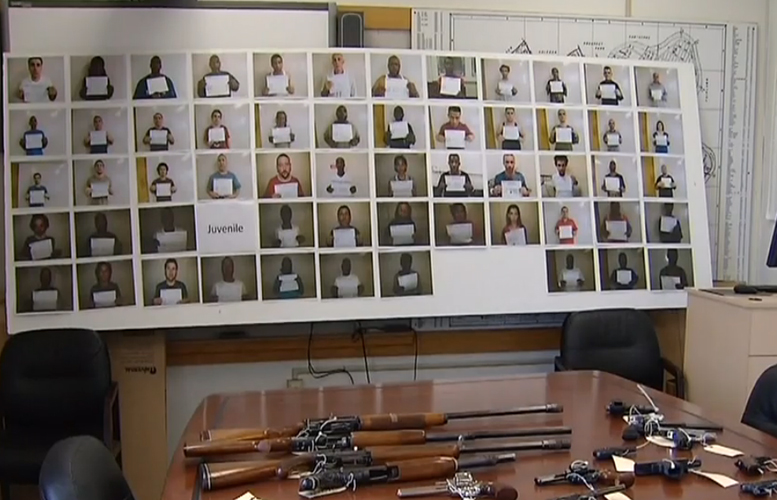 A two-week long police operation dubbed “Operation Shut it Down” concluded this week with the arrest of 170 people and the issuance of 700 motor vehicle violations, announced public safety director Glenn Brown on Thursday afternoon.

Police officers descended on the 4th Ward between June 11th and 24th to retake an area of the city where majority of the shootings take place. Brown provided breakdowns of the 170 people that were arrested. Brown said 98 individuals were arrested on drug charges, 23 were nabbed on outstanding warrants, one for eluding arrest, one for stolen vehicle, one for trespassing, and the rest for various other offenses.

Brown said most of those arrested were low-level drug dealers. Out of the total 24 individuals were from outside of the city, said Brown stating some came from as far away as Pennsylvania.

“20 assorted handguns as well shotguns were recovered during the course of this investigation,” said Brown.

The director said over 2,000 glassine packets of heroin, 158 baggies of crack-cocaine, and 18 grams of crack-cocaine was recovered in the course of the operation. “We recovered methamphetamine, percocet pills, and ecstasy pills,” said Brown.

When asked how many officers were involved, Brown said the exact count was unavailable, but an amalgam of law enforcement officers from various agencies worked together in the two-week operation. “We had officers from the United States Marshall Service, we had the New York/New Jersey Task Force, Hudson County Prosecutor’s and Sheriff’s Offices and Hackensack Police Department,” said Brown.

“Zero tolerance is the message that should be understood and these operations can be moved to any other part of the city we determine we need to lift and shift our operation,” said Brown. “We don’t tell anyone what we’re going to do next, we just implement it.”

Brown hopes the operation will bring some stability to the city’s crime infested 4th Ward. The director cited six-month crime statistic for 2014, saying crime is down 24-percent compared to same time last year. Brown said crime has declined by more than 40-percent in some sections of the city.

Residents should prepare to see more cops on foot patrol, said Brown. “They should look forward to seeing walking cops in their area because that’s the next phase of deployment,” said Brown.