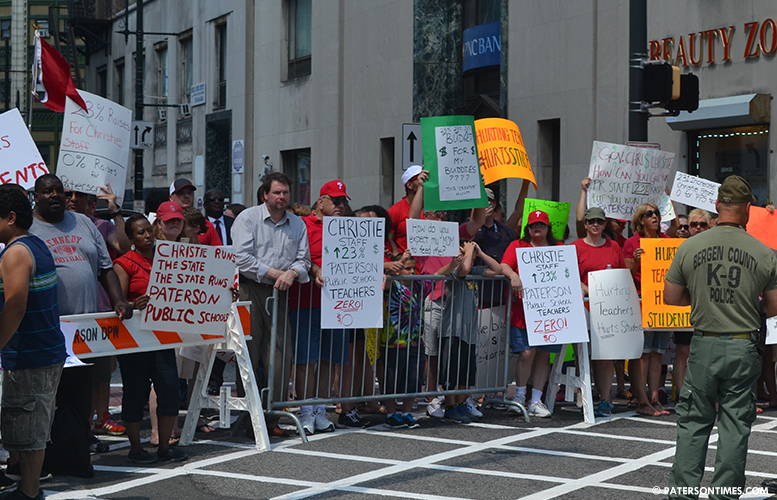 A contingent of about four dozen city teachers booed governor Chris Christie while he was swearing in mayor Jose “Joey” Torres on Tuesday morning.

About 50 teachers lined up on closed Market Street dressed in red chanting “Christie’s got to go!” while the governor administered oath of office to Torres.

“We’ve been saddled with a seven year contract,” said Ryan Cohen, a city teacher and organizer of the protest. “They’re saying no step increments.”

Cohen said he and the band of protesting teachers came out to express their disapproval at the “atrocious” teachers’ contract the state and the Paterson Education Association, the local teachers’ union, negotiated over four years.

Teachers have been critical of the new contract because it does not include base pay increase. “It freezes you where you were at four years ago,” said a school teacher at the protest who did not want his name published.

“I’m paid less now than when I started,” added a School 18 teacher.

Cohen said the protest is an independent one unconnected to the teachers’ union. However, the organizer added that the new contract grants much higher increases to those with advanced degrees like masters while those with bachelors do not receive as much.

Protesters intermittently chanted, “Christie’s got to go!” at times drowning out speakers at the inauguration ceremony.

Christie, who is often provoked by hecklers and protesters, did not respond to the protester. Instead, the governor administered the oath to Torres and quickly left the city.

Worried about teachers’ morale next year, Cohen said he isn’t sure how teachers are going to be able to do their job next year with morale being this low. “Morale is going to be so low next year,” said Cohen.