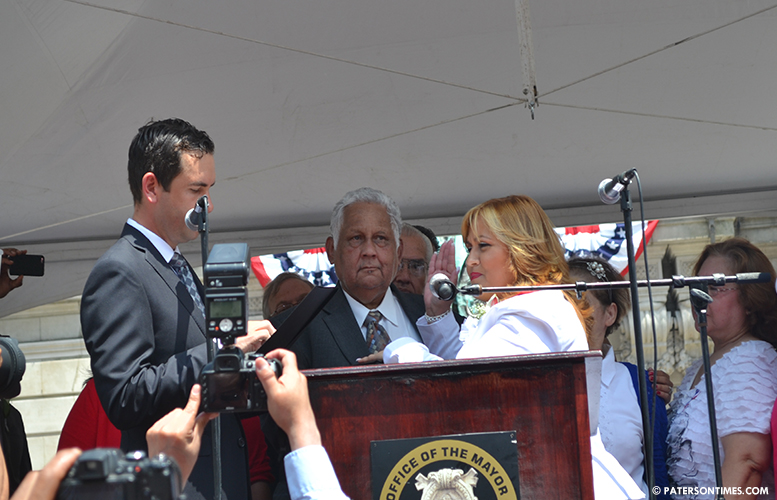 In the shadows of the mayoral inauguration on Tuesday afternoon was the swearing in of three at-large council members: former school board member Domingo “Alex” Mendez, three-term councilman Kenneth Morris for a fourth term, and Maritza Davila, first Peruvian-American council person.

Not to be out done by mayor Jose “Joey” Torres’ oath of office which was administered by governor Chris Christie, Davila had her oath administered by popular Jersey City mayor Steven Fulop.

An emotional Davila thanked her family and supporters. She promised to open a constituent service office outside the city council offices to assist residents who often have difficulty finding parking to come into city hall in search of help.

“Today we’re celebrating the Peruvian community, the third largest Hispanic community in Paterson, for finally having someone at the table to discuss those things of value,” said Torres congratulating Davila for being the only other woman in the council.

Mendez was sworn in by state senator Nellie Pou. Mendez like the other at-large council member promised to work with the new mayor. “I just remember when I came here in 2000 for the first time to the United States,” said Mendez. “I used to work in a grocery store. I used to work for 12 hours, then I used to go to school.”

My first apartment was an attic, said Mendez mentioning all that he has been able to accomplish after moving to the city from the Dominican Republic.

“Some of you are one tax increase away from losing your home,” Morris told a crowd of hundreds who gathered in front of the city hall to watch the new mayor and council being sworn in.

Morris asserted that he was able to procure a fourth term in office because he remains faithful to the interest of city residents by being their voice on the governing body.

“The three of us and our colleagues are committed to working with incoming mayor Torres to ensure the city we love will prosper,” said Morris.