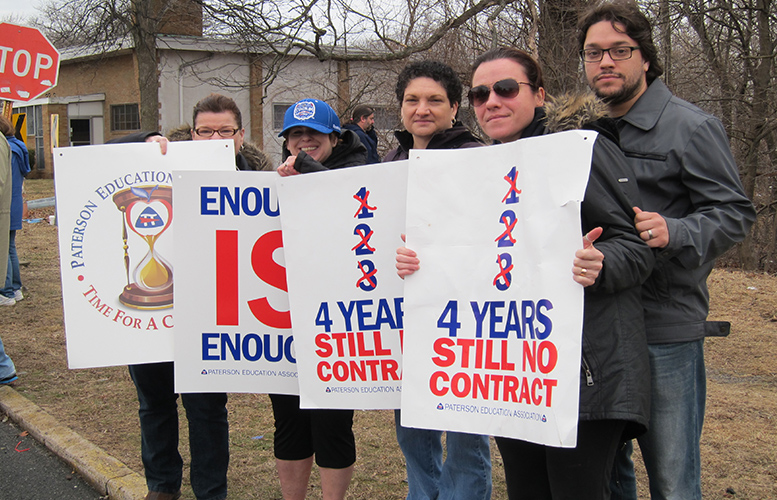 The city’s school teachers voted this week to approve a three-year contract with the school district.

Members of the Paterson Education Association, the teachers’ union, voted through email and mail-in ballots during the week ratifying a contract covering 2010-14 and a second contract that runs from 2014-17.

“We all know that this contract was an unpopular one,” stated Pete Tirri, the union’s president, in a statement issued to rank and file members on Friday. “The voting reflects that.”

Little less than 53-percent of the union’s membership voted in favor of ratifying the contracts. “People voted out of fear,” said a teacher who did not wish to be named. She said teachers feared the alternative of returning to the negotiating table and receiving a far worse contract than the deal that was struck two-month ago.

Four-year without contract, squeezed teachers had little choice but to vote in the affirmative to at least have something in place.

“Many members felt we should have rejected their anti-educator, anti-union, political actions, but recognized in the long run that moving forward was a better option than the alternatives that we would face,” said Tirri to the members.

Calling the contract unpopular is an understatement, said another teacher. “I’m supposed to be at step 16 this coming September, they’re telling me with this contract that I’m at step 12,” said a teacher. “It’s as if the last four years of my work didn’t count.”

Since the last contract expired in June 2010, teachers were frozen in their incumbent steps without increases. The salary difference between someone on step 12 and 16 is day and night. A teacher with a bachelor’s degree on step 12 takes home $54,000 while on step 16 that same teacher makes $91,000, according to the step guide in the new contract.

Another teacher, who also did not want his name published, said with the increase in healthcare contribution, he will be taking home less pay than the past four years.

“Next school year, with the increase in our insurance requirement, I will be taking home less than I did with the pay freeze for the past four years,” said the teacher. “I crunched the numbers and even with moving over to the universal guide and getting a meager raise I will be taking home approximately $180 less than I have been the past four years.”

The contract also includes $19 million in retroactive pay for union members. Our first teacher said she will be receive $8,900 in retro pay for working without a contract for the past four years.

Teachers on the traditional guide are given the option to switch over to the universal guide.

The new contract was set to be adopted sometime in mid-June, but members were confused as to what the agreement entailed. The union scheduled a vote during the last week of school only to postpone it later and use the scheduled meeting as an information session to explain the details of the contract.

Teachers were unhappy to learn the detail of their contract. Outraged, the teachers organized a small protest against governor Chris Christie during his visit to administer oath of office to newly elected mayor Jose “Joey” Torres.

Teachers’ “Christie’s got to go!” chants drowned out the governor’s voice during the ceremony resulting in the governor cutting short his visit.

“I’m not outraged, I’m just disappointed,” said a teacher who voted against the contract.

With a union divided in half, Tirri called on the membership to unify to battle anti-union initiatives put forward by the governor.

“We must regroup, but the bad taste left in our mouths has to be left behind us. We are going to have to prepare to battle the negative initiatives that he [Christie] is already trying to put forward,” read Tirri’s statement to the members. “We hope our members recognize this and can come together in a united front against these initiatives.”

Tirri could not be reached for comments on Friday for this story.