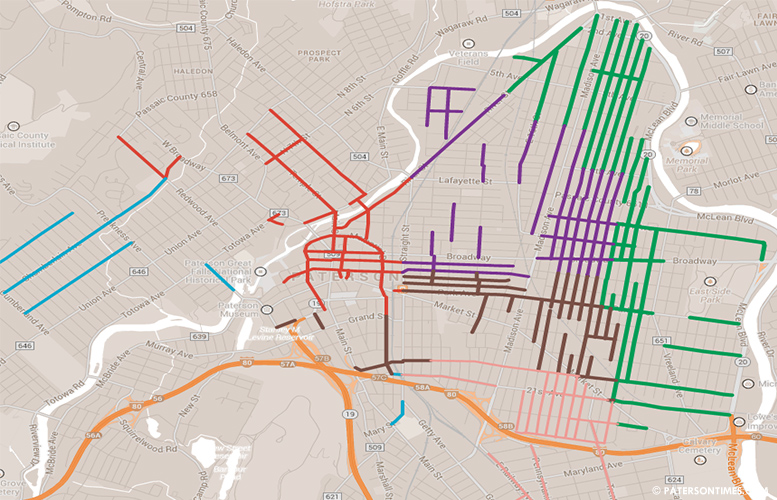 An ambitious project soon to be commenced with $36.75 million in borrowed funds to reconstruct approximately 170 primary city roads mostly covers the city’s interior, the 3rd, 5th, and 4th Wards, according to city records.

The city’s 3rd Ward will see most of the road work with 36 street segments planned for resurfacing. Roads will go through a milling process before they are resurfaced with an accessibility ramp, and reconstructed catch basin.

Closely following the largest number of road reconstructions in the 3rd Ward is the 5th Ward with 35 segments to be resurfaced. Park Avenue, the main business corridor in the 5th Ward, will be resurfaced in its entirety along with East 23rd Street running through 5th and 3rd Wards.

4th and 6th Wards will each see the reconstruction of 30 road segments each. Trenton Avenue in the 6th Ward will be resurfaced from 22nd Avenue to the border of Clifton. Save for one small block, East Railway Avenue will be entirely resurfaced along with much of Pennsylvania Avenue.

4th Ward will see the complete reconstruction of River, East 19th, and Van Houten Streets. The 1st Ward, whose councilman, Anthony Davis, complained some of his streets have not been touched during the many cycles of street resurfacing in the past years, will see the 2nd lowest number of road segments reconstructed. Temple and Jefferson Streets, Memorial Drive and Cianci Street are to be entirely resurfaced.

In total 27 road segments will be resurfaced in the 1st Ward.

The 2nd Ward has the fewest road reconstructions. However, that may be due to the small number of primary roads in that ward. Chamberlain and Chatham Avenues, half of Crosby and a sliver of Wayne Avenues are set to be resurfaced. McBride and Union Avenues are county roads.

The reconstruction plan, a campaign promise made by mayor Jose “Joey” Torres, has received preliminary approval from the city’s governing body and must be approved by the state before the city can commence any of the planned reconstructions.

$36.75 million is the price tag for the resurfacing project. $35 million will be borrowed in the short-term through bond anticipation notes before being converted to long-term bonds; $1.75 million down payment will be scraped together from the city’s capital fund and left over bond money from previous borrowings.

Debt service or payments to repay the loan will come from the city’s annual road maintenance budget. A point that has raised some concerns for council members. Many have said this will leave the city’s secondary roads neglected. Torres asserts that the secondary roads can be maintained through an approximately $500,000 grant the city receives from the state’s Department of Transportation every year.

City officials are hoping the state will give its blessings during a meeting of the Local Finance Board in mid-August and some resurfacing can be completed before winter begins.