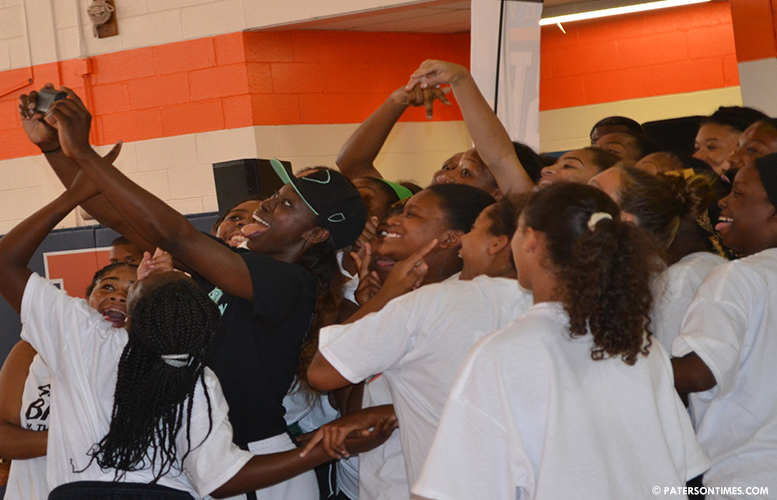 The city’s native daughter Essence Carson unveiled a refurbished gymnasium at Eastside High School on Monday afternoon part of the New York Knicks and Chase Bank’s Basketball in the Boroughs and Beyond program.

Carson, who plays for the New York Liberty women’s basketball team, said when she was playing basketball at the school from 2000 to 2004, the gymnasium was fairly new. “I came back about two years later to see wear and tear at the court,” said Carson.

“I remember, when I was a kid I would go somewhere to play basketball, why? Basketball was a way for me to free my mind,” said Carson to a group of approximately 100 girls or aspiring basketball players. “So why not bring that to you guys?”

Towards the end of the most recent school year, Carson connected the school to the Knicks, her team, and Chase to refurbish the gym at the school. About a month later in June, the two teams and the bank, formulated a plan with the school’s principal to refurbish the courts and the gym floor.

“This is a great moment for us,” said the school’s principal Zatiti Moody. “This probably wouldn’t have happened without our own Essence Carson.”

“With the financial issues that some school districts have, especially in an urban area, it really helps,” said Ray Lyde, girls basketball coach at the school.

The school has a formidable basketball program. This year Taylor Brown was named North Jersey’s player of the year after the Lady Ghosts won two titles: Passaic County Tournament and Group 4 titles.

“We now have at Eastside High School a state-of-the-art gymnasium for our student athletes to play on,” said deputy superintendent Eileen Shafer.

After the unveiling, Carson and Knicks alum Larry Johnson held a clinic for the girls, mostly 10 to 15 year-olds. The two led the girls in passing, shooting, and rebounding. A shooting contest with prizes and giveaways followed.

“I guess they look up to me,” said a down to earth Carson, when asked whether the girls see her as an inspiration. “I had some great times here. Won a few championships here. Met a lot of mentors who steered me in the right direction.”

Carson, who did not flinch when a girl asked to take a selfie,  said playing basketball frees the mind and when a player is dribbling to the other side of the court all the worries and stresses of urban life dissipates.

Carson, who graduated in 2004 from Rosa Parks High School but played in the Eastside team, is hoping other girls will be steered in the right direction through basketball just as she was a decade ago.

“I’ll be out there in the Garden [Madison Square Garden] looking for some of you,” said Shafer to the girls.