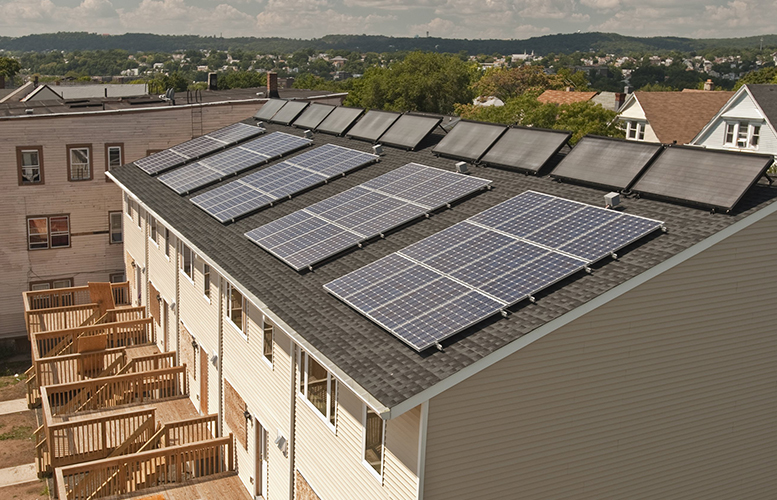 The city’s chapter of Habitat for Humanity is set to receive an award from the United States Green Building Council of New Jersey for creating a sustainable five-unit town house on Harrison Street.

The council is recognizing habitat’s accomplishment in designing and constructing a platinum rated, highest rating on the Leadership in Energy and Environmental Design (LEED) rating system, building that’s able to conserve energy.

Harrison Green, the development located at 208-216 Harrison Street, has airtight doors and windows, double-studded walls to hold extra insulation, and solar energy systems to provide internal heat and hot water, according to habitat. The green is the first multi-unit habitat development that has conformed to the council’s demanding sustainability standards.

The green’s green features allowed it to be categorized as a project that embodies “energy efficient design and construction.”

Jerry Flach of the habitat said the development is being recognized for meeting the efficiency standards set forth in LEED, a standard developed by the council to rate green buildings. Flach said the non-profit which has been attempting to bring some sort of neighborhood stability in the city’s transitional and unstable 4th Ward is excited about being recognized.

The five units of the green is currently being occupied by low-income families. All five families received zero-interest loans via habitat to purchase their freshly built homes following 300 hours of sweat equity.

The non-profit, which first began its mission in the city 30 years ago, requires the buying family to contribute volunteer hours in building the home. During its three decade in the city, habitat has provided 265 families with a home of their own, according to the non-profit.

Habitat and five other projects from the Garden State will receive the council’s Emerald Awards on November 7th, 2014 in Montclair State University.