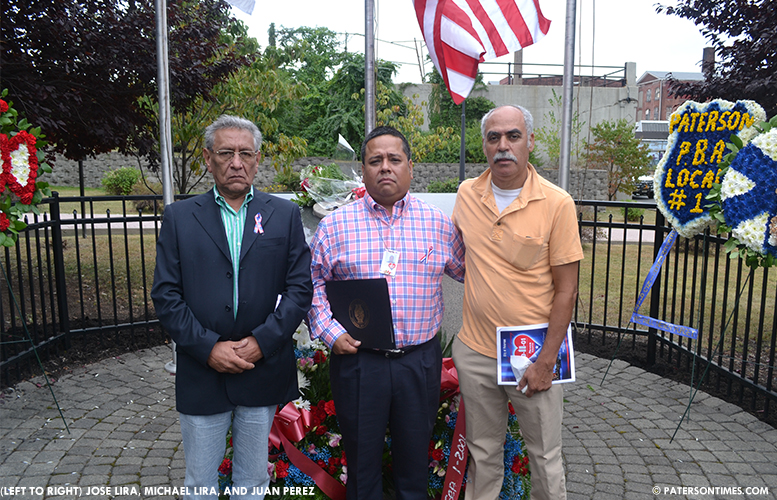 Kenneth Lira was working on the 107th floor of the center’s south tower, said Michael Lira, the brother. His brother was only 28-year-old when the Lira family lost a son. Michael Lira, who is 18-month younger than his older brother Kenneth Lira, recalls attempting to console his mother following the news of her son’s demise.

“The first couple of days after 9/11 were probably the most trying for me because I just lost my brother,” recalled Michal Lira, brother of Kenneth Lira. My mother was inconsolable as was our whole family, said Michael Lira. “I couldn’t even make them stop crying,” said Michael Lira, who attended the ceremony with his father Jose Lira and uncle Juan Perez.

The Liras live on Buffalo Avenue in the city’s Lakeview section. Kenneth Lira lived at the family’s home attending Bergen Catholic High School in Paramus. After schooling he began working for Genuity. He had been working for the company for little over three years when passenger planes struck the tower.

“Today we recognize them, so the future generations will never forget their story,” said mayor Jose “Joey” Torres. “We commemorate the life of Kenneth Lira, beloved son and brother, whose life was cut short at the age of 28.”

Officials also recognized the city’s police force and fire department placing several wreaths at a September 11th memorial that was erected in 2002, a year following the attacks. “Everyone remembers where they were that day,” said police director Jerry Speziale. “I remember I was at ground zero within hours with the Paterson Police Department.”

Police and fire departments from throughout the area rushed to the attack sites to provide assistance to fellow emergency responders in New York City.

The more than two-hour long ceremony featured narratives of events as they unfolded on that tragic day that left almost 3,000 Americans dead. At 8:46 a.m. Donnie Evans, state-appointed superintendent for the city’s school district, read out a blurb about the first plane, American Airlines Flight 11 out of Boston, that crashed into the north tower.

After each narrative timeline, a moment of silence followed. “[Kenneth Lira] didn’t live to see his 30th birthday, he would have been 40 years old,” said Andre Sayegh, 6th Ward councilman.