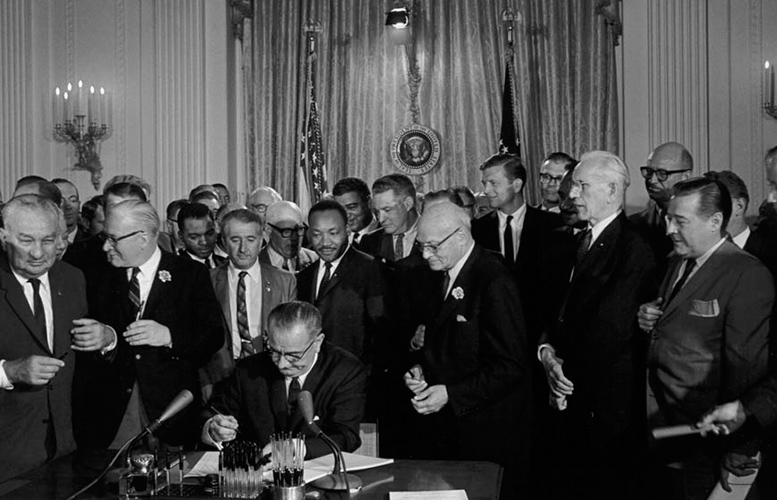 The Civil Rights Act of 1964 enacted July 2, 1964 is a comprehensive landmark piece of legislation that outlawed discrimination based on race, color, religion, sex, or national origin color.

Fifty years ago, passage of the “‘Act” resulted from the convergence of multiple and divergent influences here and abroad. In the United States, the Civil Rights Movement and the pivotal events of Birmingham and Montgomery, of course, were catalysts. Also, the assassination of President Kennedy educed support for his signature legislation.

In his inaugural address to a joint session of Congress on November 27, 1963, Lyndon Johnson told the legislators “no memorial oration or eulogy could honor President Kennedy’s memory than the earliest possible passage of the civil rights bill for which he fought so long.” Abroad, America’s disenfranchisement of its African-American citizens while proselytizing democracy over Russia’s communism had become indefensible. These influences, among others, are generally known.

In contrast, the critical role played by the three branches of government is not so widely recognized.

Johnson was not known as a civil rights advocate while serving as a U.S senator – in fact he had opposed all previous  civil rights measures. In the fall of 1963, President Kennedy sent his proposed legislation to Congress. Johnson took up Kennedy’s cause and after his death. Kennedy’s bill combined elements of the Civil Rights Act of 1875, which guaranteed equal treatment for Blacks in public accommodations before the Supreme Court ruled that the law was unconstitutional. It also bolstered The Civil Rights Act of 1957 which guaranteed voting rights but was largely ineffective because it lacked enforcement mechanisms.

Passage of comprehensive Civil Rights bill became part of Johnson’s Great Society Agenda and it drew bipartisan support. Johnson intervened to garner support for the Act from the southern democratic coalition of which he had been member as senator. His staff warned that the intervention would not only cause him to lose their support but the upcoming national election as well. They were wrong on the latter account — Johnson won the 1964 election by a landslide. The outcome on the former was even graver than predicted — not only did Johnson lose their support but the solid Democratic south defected to the Republican Party and has never returned.

The bill consumed the senate for 57 working days and prompted a record breaking filibuster. On June 9th, 1964, Senator Robert Byrd, a West Virginia Democrat, began a speech that lasted throughout the night for 14 hours. It finally came to close because Democratic Whip Hubert H. Humphrey, Johnson’s future vice president, with the assistance of Minority Leader Everett Dirksen had corralled the needed votes to end Byrd’s filibuster.

In touting the bill to the Senate floor Dirksen quoted poet Victor Hugo: “Stronger than all armies is an idea whose time has come.” He then stated that “[t]he time had come for equality of opportunity in sharing in government, in education, and in employment. It will not be stayed or denied. It is here.”

Seventy one senators voted to end the filibuster, including Clair Engle (D. CA.) who was terminally ill. Unable to speak because of a brain tumor, Engle pointed to his eye to signify which way he was voting.

The bill passed the Senate 73- 27 and the House 289-126, on the backs of Northern Democrats and Republicans. Yet just before passage, at the literally the last minute, there is an interesting untold story behind Civil Rights Act.

The story behind how gender became part of the bill is a fascinating one. It involves, Rep. Martha Griffiths (D- M), the first woman to serve on the U.S House of Representative’s Ways and Means Committee. Sex was not included in the original wording of Civil Rights Act. But Griffiths planned on introducing an amendment to include women.

Rep. Howard Worth Smith (D.VA)) then chair of the House Ways and Means Committee, had a plan to add a similar amendment. At first glance, Smith might seem like a champion of women’s rights. But upon closer scrutiny we learn that Smith was not concerned with gender equity. A segregationist, he was vehemently opposed to civil rights legislation of any kind including discrimination based on gender. The proposed amendment was a ploy because he believed that it would make the legislation so unpalatable to northern Democrats and Republicans as to preclude support. In the past, both groups, under pressure from labor unions, had voted against similar clauses in legislation.

Biding her time, Griffiths held off from introducing the amendment because she knew that Smith could easily gather the 100 southern votes need to move things forward. When Smith introduced the amendment the chamber reportedly erupted into jeers and laughter. Griffiths retorted “I presume that if there had been any necessity to point out that women were a second class sex, the laughter would have proved it.”

The bill ended up passing with language including sex, thanks in large part to Smith’s efforts at securing the required number of votes. Ironically, women have benefited more than any other group from the Act.

Lesser consideration has been given to the covert and concerted efforts of the three government branches. As for the judiciary, Bell v Maryland was on petition before the Court.  In Bell, a group of African Americans challenged a restaurant‘s segregation policies. At issue was whether the Fourteenth Amendment’s Equal Protection clause applied to private businesses like restaurants or only to state action. Any decision prior to the Act’s passage would have been a death knell because a key provision of the Act prohibited discrimination by private business. On one hand, a ruling in favor of the plaintiffs would bolster the argument that the key provision and the Act itself were no longer needed. On the other hand, a ruling against the plaintiffs would mean that the key provision would have been rendered unconstitutional at its inception.

Facing a quandary, the Court validated civil rights by stepping aside instead of ruling. Justice William Brennan, Jr. was the orchestrator.  First, in cahoots with the executive branch, Brennan sought to delay the matter by having the Solicitor General ask for time to review the matter. Subsequently, when enough votes had been garnered to grant a hearing, Brennan wangled a strategic recoil; he assembled a majority that circumvented the merits of the case.

Fifty years later, the battle to end overt discrimination has been far more successful than the effort to attain economic, educational or social mobility. Blacks have made huge gains in high school education but still lag in college rates. Their incomes have risen and poverty rates declined but a mammoth wealth gap remains, along with persistently high unemployment rates. School desegregation declined initially but for the most part blacks still overwhelmingly attend segregated school and continue to live in segregated neighborhoods. Without question life after the Act improved significantly for most blacks. However, statistics indicate that the Act was not a panacea:

The median family income for blacks inflation adjusted dollars is up from $22,000 in 1963 to more than $40,000 today, is still just two thirds of the median for all Americans. Black unemployment remains at least twice the level of white unemployment which is similar to where it was in 1972; the gap in overall wealth is more than 5 to 1 between whites and blacks, the average white household had nearly $800,000 in assets in 2011 compared with $154,000 for blacks. There has been a significant increase in the black middle class. Blacks found jobs in large part in the government at all levels. But the global economy has negated much of the gains that otherwise would have been felt from reducing work place discrimination. Blacks have not caught up to whites in educational attainment and still lag significantly behind in performance on standard tests. Black schools have been re-segratated with less qualified teachers and weaker educational offerings.

The country as a whole widely supported the Civil Rights legislation; it received broad bi- partisan support in both Houses, and was endorsed by a majority of the Court.

Today, those factors and sentiments which shepherded the Act’s passage are no longer present to insure the Act’s continued enforcement. Some have speculated the given the present polarized political climate in Congress that a similar bill would not likely be approved today.  Perhaps more critically, the national conscience and the federal courts have signaled a retreat from protections afforded Blacks and other ethnic minorities. The Federal judiciary displays what one observer calls “growing discomfort with slightest hint of special preferences.” Perhaps even more frightening is the mounting evidence that the John Robert’s Court will further diminish or even nullify the imperatives of Title VII of the Act. The Court’s recent ruling in The Voting Rights case seems to attest to this prophecy.

Written by W. Ray Kwame Williams, who is an alumni of Eastside High School and a lecturer at Rutgers Business School-Newark and New Brunswick.