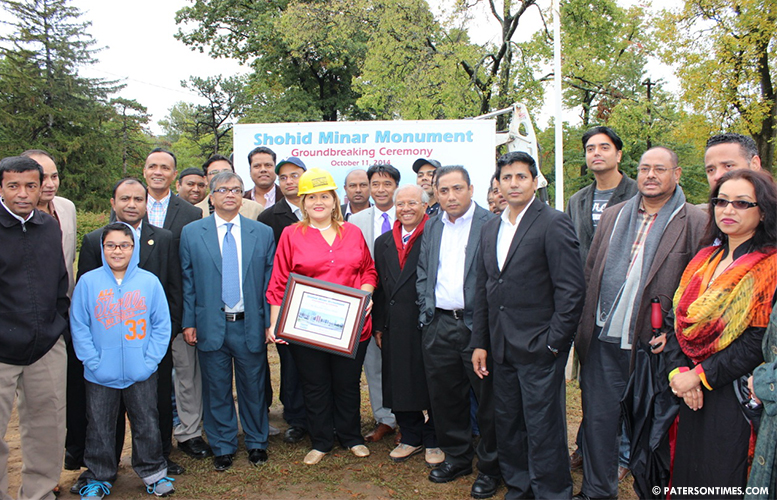 The city’s Bangladeshi-American community broke ground on a soon-to-be built Shohid Minar, a monument honoring those who gave their lives to preserve the Bengali language, in Westside Park on Saturday morning.

Elders, community leaders, and local politicians, gathered behind John F. Kennedy High School with umbrellas over head to break ground on the monument which has been in the works for well over a year.

“I’m feeling very proud and at the same time very much excited that we are having this outside of our country and [that] I’m being a part of this,” city resident Farah Haseen said. Haseen migrated from her native Bangladesh to the United States two years ago, she said.

The monument is a replica of one that stands in Dhaka celebrating and honoring men and women who lost their lives in a struggle to preserve their mother tongue. In 1952, students from major Bangladeshi universities protested against the imposition of Urdu as the official language of then East Pakistan. The protesters were shot and killed by police outside the Bangladeshi high court.

Haseen said she visits the monument in Dhaka every year on the 21st of February in honor of those who sacrificed their lives to allow her the ability to speak a language which otherwise would have been condemned to history books.

Officials said the project was made possible by funds from the Passaic County Open Space Fund which awarded $150,000 to see the project reach completion. The New Jersey Community Development Corporation (NJCDC) and WorldGlam Entertainment are working to get the project completed before February 21, 2015.

President of NJCDC Robert Guarasci said the project is slated for completion in the next three months. Guarasci’s organization says the project is just part of a large initiative to revitalize the once picturesque Westside Park.

North Jersey has roughly 15,000 residents of Bangladeshi. One of them is Plainsboro Township councilman Nurun Nabi.

“A hundred years from now, maybe we might not live here. We might graduate from here and move to other towns. And maybe somebody, I’m sure, will be driving on Totowa Avenue and they will ask ‘What is this Shohid Minar monument?’ And someone will whisper into their ear, ‘Once upon a time, Bengali people used to live here,” said Nabi. “I am so proud that this is happening in my time.”