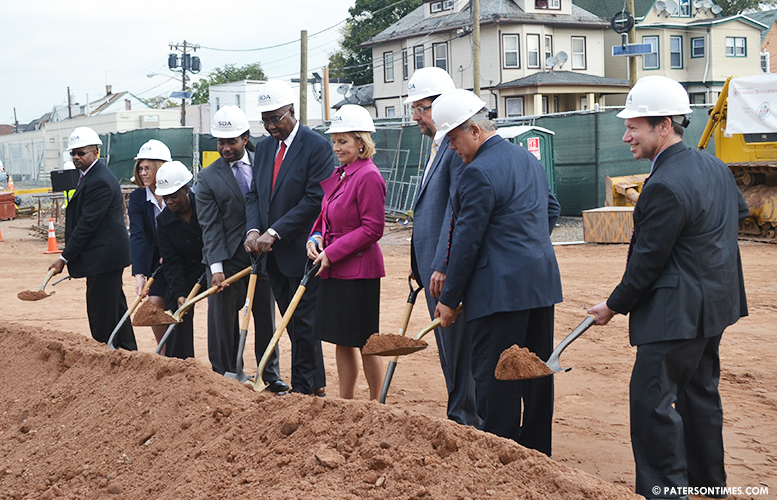 State officials visited the construction site of School 16 on 22nd Avenue for a ground breaking ceremony on Tuesday morning. Lieutenant governor Kim Guadagno, joined by local and state officials, broke ground on the school slated for completion in 2016.

“We’re committed to make sure the schools in Paterson are every bit as good as they are anywhere else in the state,” said Charles McKenna, head of the School Development Authority (SDA), as sound of machinery rumbled in the background.

Guadagno estimated the school’s construction cost to stand at $62 million.

“It will be the first green school here in Paterson,” said Donnie Evans, state-appointed district superintendent.

Evans said the district is in need of school buildings due to overcrowding. “Our school district is seriously disadvantaged because of our facilities needs,” said Evans. “In this immediate area, all around us, the schools are severely overcrowded.”

McKenna and Guadagno understood the urgent need for schools in the city. “I want to challenge the construction company to make sure this is on time and on budget,” said Guadagno, who is serving as acting governor with governor Chris Christie away in Washington D.C.

“This is being built as a design-build,” said McKenna. “One of the things about design-build is we can build buildings faster.”

McKenna credited the Parent Education Organizing Council (PEOC) for its advocacy. Linda Reid, head of the council, said her organization has visited Trenton numerous times to push for school constructions in the city.

McKenna recalled the council pleading to the state to “not forget Paterson.”

“We’ve been waiting for this for so long,” said Rosie Grant, director of the Paterson Education Fund, an advocacy.

Grant said it took the state 11 years to move this project forward, but she is optimistic things will move forward without stops.

The school will hold 645 students after completion. The Marshall and Hazel Streets school will hold an additional 650 students. With both schools set to welcome students in fall 2016, officials are hoping other schools will be less overcrowded as a result.