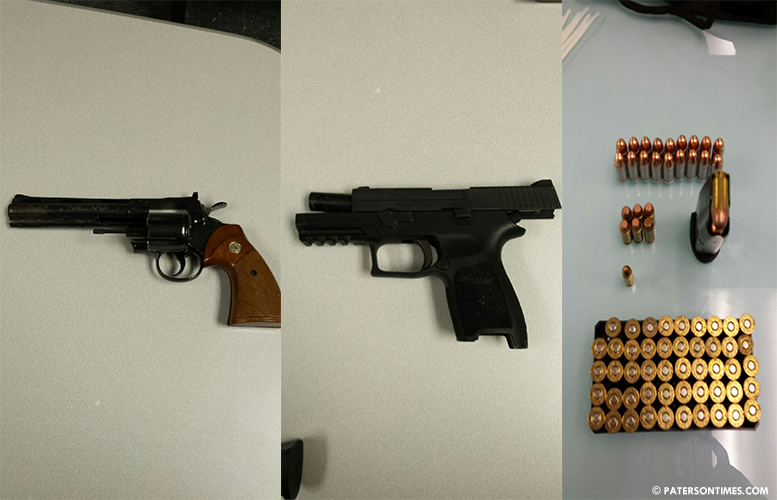 Two handguns and 88 bullets were recovered by sheriff’s officers on Belmont Avenue and Presidential Boulevard during the evening hours of Monday, according to the Passaic County Sheriff’s Office.

Detectives Joseph Cammisa and Raphael Garcia received a tip from a citizen that a suspicious red Mitsubishi Galant was parked in the rear of 100-106 Belmont Avenue. The detectives arrived on the scene to find the vehicle was unlocked with trunk opened up without license plates. On further inspection, Cammisa and Garcia located a black Nike book bag inside of which was a loaded Sig Sauer P250 forty-five caliber handgun with one magazine clip.

During the same night officers responded to another tip on Jefferson and Presidential Boulevard finding a handgun stashed in a garbage heap. “The Detectives recovered from the garbage container, wrapped up in the t-shirt, a Python .357 Magnum Revolver, which was stolen,” Berdnik said.

“Because of the anonymous information of two concerned citizens, guns and ammunition were taken off the streets of Paterson. Every bullet taken off the street helps avoid another unnecessary shooting,” Berdnik said. “It is my hope that more citizens come forward with information about illegal activity, so law enforcement take the appropriate action.”