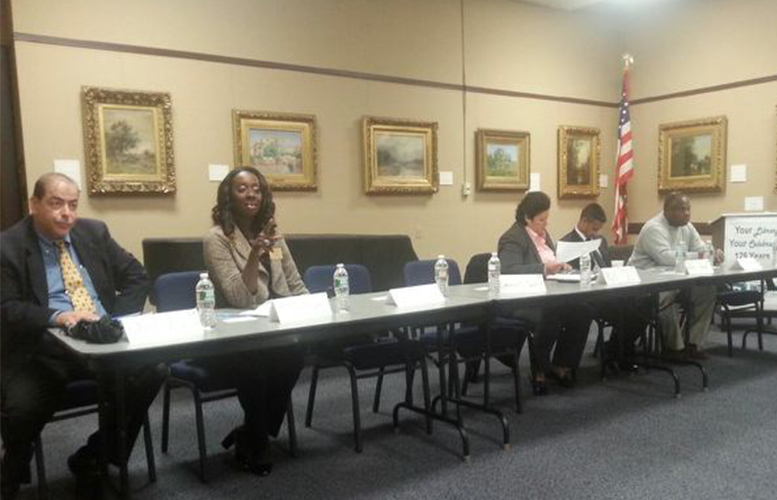 “What if anything would you do outside of the box?” asked David Thompson, moderator for the 2nd school board forum held Wednesday evening at the Danforth Memorial Library. With five out of the eight candidates running to capture one of the three up for grabs full-term seats at the city’s board of education present, Jonathan Hodges, incumbent, answered he is already using an out of the box approach.

Hodges cited an out of the box plan that he executed to pressure state officials into granting funds to build International High School on Grand Street. He said price tag to build the high school stood at $7.2 million with the state reluctant to fund the project. “We were told we couldn’t have the money,” said Hodges. “I went to see governor [Jon] Corzine at four different events.”

In each of the four events, Hodges asked where the funding was to build the high school. “The last time I asked the question, he saw me in line and said, ‘there’s Jerry [sic] Hodges, he’s one of the most strong student advocates in the state, but he’s stalking me around the state of New Jersey.”

At all four events Corzine agreed to fund the project, but very little was being done. “I put him on the record,” said Hodges.

Answering the same question, newcomer Koyes Ahmed, a software testing engineer, said attending city schools he recalls being part of competitions with surrounding school districts, a practice, he says, has ceased in recent years. “We need to build relationships with other towns and we need to see why their performance score is higher than Paterson’s,” said Ahmed.

Ahmed wants to institute a program to allow district students to compete with schools in Wayne, Clifton, and Haledon. Ahmed also said he wants the district to organize roundtables with alumni students to raise funds for district programs. He said it will also motivate current students into thinking: if this individual, who attended the same school, managed to succeed, so can I.

Suggesting financial problems might prohibit experimentation and innovative approaches in the district, Nelly Celi, challenger, said the district needs to reduce the number of ineffective programs.

Celi said programs that are not producing results should be axed. “We need to stop throwing money at problems, saying we need more money, we need to look at what we have, what resources are available,” said Celi. “If it’s not a quality program shut it down and start all over again.”

“I want to initiate forums throughout the year to have conversations with parents to see why they are not participating,” said Lilisa Mimms. She wants to setup forums in each of the six wards to figure out why parents are not enthusiastically taking part in their children’s education.

Mimms also talked about the attendance improvement in School 5, where the principal has managed to reduce absenteeism by 76-percent last school year. “We should go to School 5, talk to the principal of School 5, find out what they did, and allow that to be implemented district wide,” said Mimms.

“Everybody knows the gadget,” said Khader “Ken” Abuassab. “The gadget is very famous to all the kids.”

Abuassab said he wants rid the schools of books and place a gadget or computer in front of students. “The child will sit in front of a computer with no books and everything will be done on a touch screen,” said Abuassab.

Realizing the candidates will simply recycle answers, Thompson asked for another statistical number, but this time asked the candidates to write it on a piece of paper.

The forum was attended by roughly 50 people estimated Jesus Castro, head of the Hispanic Council. “Good questions were asked,” said Castro, who thought Celi and Hodges put on better performance than others.

“The other folks weren’t as specific with their answers,” added Castro. Most of the answers given by the newer candidates were generic, said Castro.