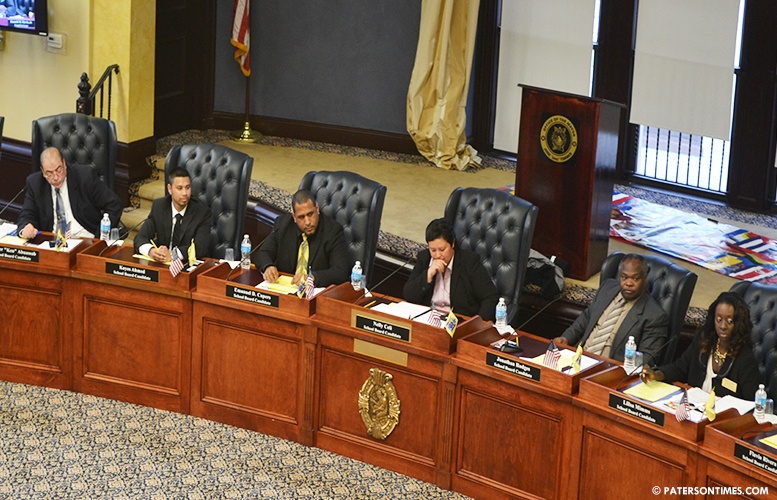 Regaining local control, Common Core standards, standardized test scores, and college readiness, were some of the topics touched on by school board candidates during a forum organized by the city’s governing body late last week.

“The only way we can change this is to increase our scores,” answered said Khader “Ken” Abuassab, when asked what each candidate plans to do to regain local control of the city’s school district. “We have to prove to the state we can handle our own budget, teaching system.”

Citing the recent return of operations to the board, Nelly Celi said the board should prove itself in operations prior to asking for other areas. “I’d concentrate on operations and make it top notch, so that everyone looking around goes: ‘Wow, how’d they do that. They lost it 23 years ago, but they came back better than before.’”

Celi said it would be difficult for the state to lay claim to the district when things are being run as they ought to be.

Emanuel Capers, founder of the 4th and Inches Foundation which holds football camps for city youths, said he agreed with Celi, suggesting the district has to be managed properly before local control is regained. “Make sure money is not being spent in the wrong ways,” said Capers.

Lilisa Mimms, pastor, mentioned the 80-percent benchmark that the district has to meet in each areas: governance, fiscal management, personnel, and curriculum and instruction. “Once we hit those targets, there should be no qualm,” said Mimms.

Koyes Ahmed, a software testing engineer, concurred, adding, “We know much better than the state does because we’re here sitting in the school system. They don’t know day-to-day what’s going on in our school system.”

Injecting a bit of realism, Jonathan Hodges, incumbent, said the state runs the district and it also rates itself whether a decent job is being done. In such an arrangement, suggested Hodges, the city is at the mercy of the state without a fair process in place to regain local control.

“I don’t expect any of the candidates to understand what’s actually going on in this process,” said Hodges. “This is a political game.”

The only area the board has a modicum of control is in governance.

A question about Common Core standards caught some candidates off guard. A panelist at Thursday afternoon’s forum inside the city council chamber, asked whether the curriculum is fair to urban districts.

“I’m not very knowledgeable in that area,” said Ahmed. Urban and suburban should not matter, said Ahmed.

“The Common Core has been adopted, we have to follow it. We don’t have a choice,” said Celi.

Hodges said he favors the curriculum, but worries that certain subject will receive less attention as a result. “If you have 45 states that are asking for this increased concentration and standard of mastery, then we as a school district have to want that standard for our children,” said Hodges.

Abuassab agreed with Hodges adding that music and arts will receive less attention.

“Our test scores are so low it’s unacceptable,” said Capers, when asked what board members plan to do in order to improve test scores. “We have to help our kids really focus on the tests. We need writing and math, those need to improve.”

“I think it’s going back to the basics,” said Celi. “Why are children not picking up the essential material that they need to be successful to pass the standardized testing?”

“The test scores are quite frankly atrocious and I am embarrassed to have to report them,” said Hodges. He said early childhood education is the key to improving test scores.

“Our students enter school with a vocabulary that’s a thousand words fewer than their competitors,” said Hodges. He said this disadvantage hinders students from absorbing additional knowledge by reading.

Echoing Celi, Mimms too called for a return to the basics in order to improve test scores. Celi was asked what she means by returning to the basics. Teaching grammar, spelling, and math in early grades, answered Celi. “The fundamentals and the basics are necessary for success in school,” she said.

“The basics are still in place in education,” asserted Hodges.

“We’ve gotten away from the basics,” said Capers. He cited a recent college fair his organization held inside Eastside High School, where students were unable to sign their names in cursive.

“The budget cuts, these cuts are illegal,” said Hodges, mentioning the state’s disregard for the School Funding Reform Act (SFRA).

Mimms said the Quality Single Accountability Continuum (QSAC) is too stringent. “I think it’s too harsh,” she said.

When asked how they intended to ensure students were college ready, most of the candidates called for more college fairs and to expose students to colleges at an early age. However, having middle schoolers sporting college branded backpacks and pens does not exactly make them college ready.

Hodges suggested better guidance in getting students to take PSAT and SAT. Celi said not every child has to go to college. She suggested identifying attributes in students to guide them in the right direction – some may wish to attend trade school. “We need mechanics, plumbs, electricians,” said Celi.

Candidates were asked whether they support turning elementary schools into academies and granting parents the power to pick schools for their students.

“Parents should have a choice where they send their student,” said Capers. Mimms and Ahmed agreed. However, Capers disagreed on splitting elementary schools into academies. He said it will simply create increased administrative costs. “It’s almost like too many cooks in the kitchen,” said Capers, citing academies in high schools, where each academy has its own principal.

“You shouldn’t have to go somewhere else to ensure your child receives a better education,” said Celi. “You should receive a quality education in the school you are in.”

Although graduation rates have improved in recent years, dropout rate remains an issue. When asked what they intend to do to address the problem, Capers suggested night school for some.

“Give them reasons to stay in schools,” said Celi. Hodges said the school instruction needs to be interesting and compelling to engage students so much so that they enjoy coming to school. Mimms said the school needs to better transition students from eight grade to high school. She put forward the idea of holding pep rallies to make it eight graders what is expected of them in high school.

Candidates discussed various school issues for two hours and seven minutes during the forum, which will be aired on the city’s public access channel. Flavio Rivera and Taj Uddin were a no show. Chrystal Cleaves, incumbent, was unable to attend due to illness. Each candidate was given two-minute answer time for each question, one-minute rebuttal, and two-minute closing.

Delivering a palpable closing statement, speaking in bursts, Ahmed said, “I was adopted when I was seven years old. So I went through a lot of struggle, but I worked hard to get into college.”

Ahmed said he did not have a biological mother or father, but the parents he had encouraged him to pursue a better future. “My parents told me you’ll have a better life in the future if you work hard right now,” said Ahmed. “We need to give those messages to our kids as well.”