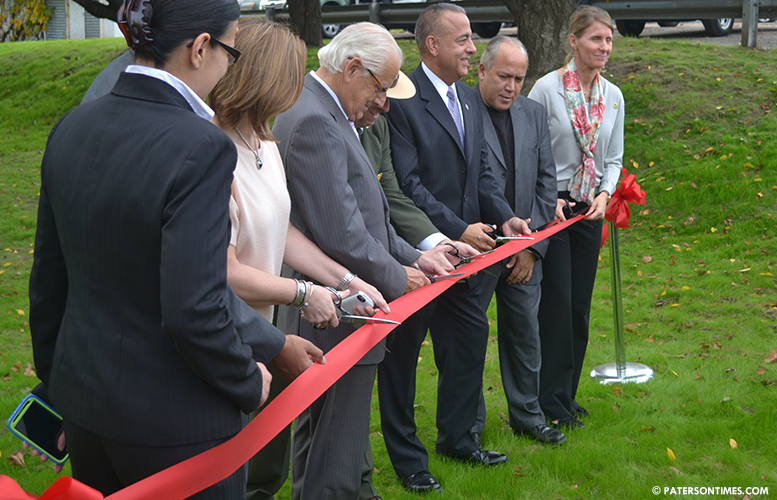 “We spend our whole lives looking at the falls from the opposite side, this time it’s on this side, a whole new dimension,” remarked Lawrence “Pat” Kramer, former city mayor, who attended the ribbon cutting ceremony to open a newly renovated trail near Maple Street.

A group of public and private entities spent $75,000 to renovate little over an acre of land that sits not far from the intersection of Wayne and Maple Streets. The small piece of land was covered with overgrown and decaying trees, bottles and trash of all sorts; however, now there is a manicured walking path with benches and retaining walls that has unlocked a view hitherto unknown.

“This section of the park behind me became overgrown and inaccessible,” said congressman Bill Pascrell. The congressman said since the new mayor came into office working towards pushing on the park has become much easier and things are progressing.

Leonard Zax, president of the Hamilton Partnership, said he must have walked through the area more than 50 times, when Eastside High School played at the nearby Hinchliffe Stadium, taking little notice of the small parcel of land. “It was a nothing parcel of land, but look at it, it’s beautiful,” said Zax.

“You could barely see the Passaic River from this view,” said Darren Boch, superintendent of the Great Falls National Park.

“What we see here today is a series of what they call rooms and this area here is known as the river room,” said Jose “Joey” Torres. “And how appropriate, when we sit here on the river bank and just absorb the great Passaic River.”

Boch said under Torres the park has been progressing forward without hindrance.

Wednesday’s ceremony was attended by local, state, and federal officials along with students from School 7 and School 28.

Much of the funds for the renovation came from the Passaic Valley Sewerage Commission and the National Park Conservation Association, a park advocacy. The city also contributed to plant trees at the location, said Boch.