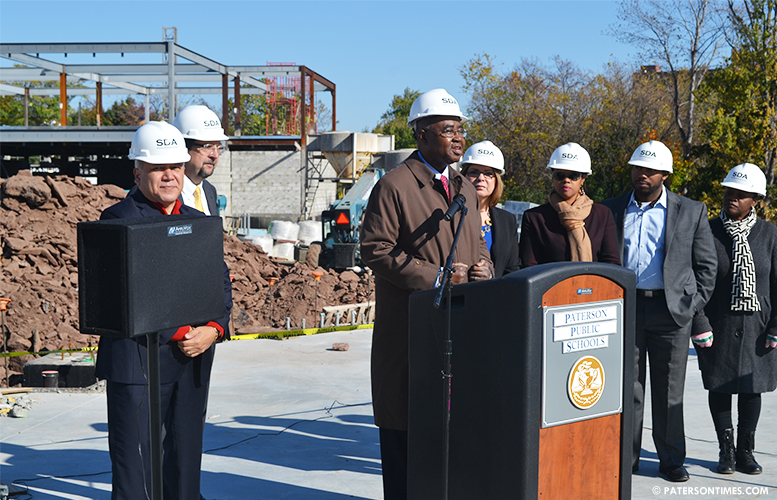 In a show of progress in the construction of a long-awaited school at the corner of Marshall and Hazel Streets, local and state officials on Monday morning celebrated one-third completion of the project with a group of School 9 students, who signed their names on a beam.

“I know this project has a long history of starts and stops, but as you can see from the steel behind me, we’re on schedule to have Paterson students in this school by September of 2016,” said Charles McKenna, head of the School Development Authority (SDA).

Fifth-to-eighth grade students from the nearby school came armed with a series of questions for state officials. One student asked a state official where the main entrance to the school will be; a state official pointed in the direction of Marshall Street informing the student the entrance will be on that side.

The group of 10 students accompanied by principal Cicely Warren were standing on the ground, where the school’s cafeteria will be located after construction, at the far corner off Hazel Street.

Signed beam being tied to a crane for placement by a construction worker.

“Today you’re part of history,” said Irving to the students. “You’ll look at this school and know your name is on it physically and literally.”

Irving instructed the students to inscribe their names clearly on the beam, so that in the future they will be able to boast of their names being part of the building.

McKenna recognized the Parent Education Organizing Council (PEOC) which has continuously lobbied the state for school construction in the city. Head of the organization Linda Reid, said it’s great to see the school construction moving forward after more than a decade of delay. 14 years has passed since the school was initially promised to the city, according to education advocates.

Mayor Jose “Joey” Torres took some of the blame for the delay stating he suggested the state add a pedestrian bridge to ensure safe passage for students. “Instead of dividing a community we’re uniting a community with that pedestrian bridge to get folks from that side of the neighborhood to this school,” said Torres. The mayor said he convinced the state to expend an additional $2 million for the bridge without which those living on Bloomfield Avenue side of the South Paterson neighborhood would have had a difficult passage.

“We desperately need for it to open ASAP,” said state-appointed district superintendent Donnie Evans. The superintendent cited the overcrowding at the George Street school stating the school was built for 850 students yet it is a building educating over 1,300.

Upon completion the school will have a capacity of 650 students with 23 regular classrooms, four kindergarten classrooms, a media center, specialized instruction classroom, lab, and a gymnasium.

After signing the beam, students watched as construction workers lifted the piece, and lowered it to its place atop a steel frame, which will eventually be turned into a school building.