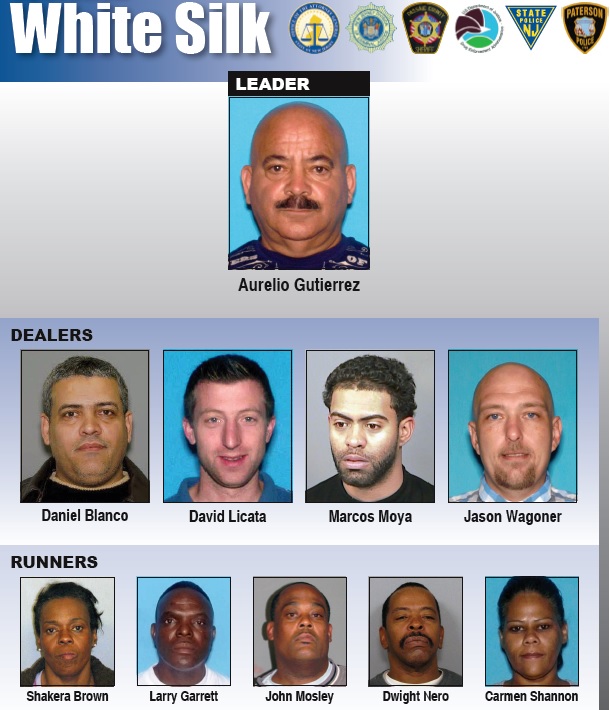 10 people were indicted earlier today including the ring leader of a city based drug distribution network that was pumping over one-thousand oxycodone pills per week in the streets of northern New Jersey, according to the New Jersey Attorney General’s Office.

Four other drug dealers or “pill brokers” who purchased highly addictive oxycodone, the generic form of OxyContin, from Gutierrez for distribution were also indicted on the same charges. Daniel Blanco, 48, of the Bronx, N.Y.; David Licata, Jr., 35, formerly of Nutley; Marcos Moya, 34, of Paterson; Jason Wagoner, 36, of Lafayette, were all indicted.

Others serving as “runners,” individuals who obtained oxycodone pills and other prescription drugs and sold it to Gutierrez, were indicted as well. City residents Shakera Brown, 54; Dwight Nero, 59; and Carmen Shannon, 46, were indicted along with John Mosley, 50, of Hackensack; Larry Garrett, 51, of Lodi.

“Gutierrez and his co-conspirators were allegedly peddling addiction and death in North Jersey in the form of thousands of oxycodone pills per month,” said acting attorney general John Hoffman. “These highly addictive pain pills are causing escalating overdose deaths across New Jersey and luring young people to the cheaper and even more lethal alternative of heroin.”

Gutierrez was arrested on Broadway selling 110 oxycodone pills to Blanco in during Operation Silk White in the summer of 2013. A search of the ringleader’s vehicle and East 17th Street home resulted in the recovery of 532 pills.

Gutierrez used his network of runners to secure anti-anxiety medication like Xanax for illegal distribution. The runners obtained prescription pills by buying them from low-income city residents who had legitimate prescriptions. They also used fraudulent prescription and even their own prescriptions obtained by showing medical conditions to secure drugs from pharmacies. Gutierrez’s ring distributed high-dose “blues” or blue pills containing 30 milligrams of oxycodone, “bananas” or oblong yellow Percocet pills containing 10 milligrams of oxycodone, and others.

Gutierrez paid the runners enough money for them to make a profit, authorities said. He became the go to source for drug dealers throughout the state. His products were of such high demand that he unloaded all the pills he acquired in a day within 24 hours.

“With high-dose 30 milligram oxycodone pills known as ‘blues’ selling for up to $30 per pill, there is a strong financial incentive for those who earn illicit profits by diverting and dealing these drugs,” director of the New Jersey division of criminal justice Elie Honig said. “But we’re determined to provide a powerful disincentive in the form of prison sentences.”

“It is essential that law enforcement continue to work together to eliminate narcotic distribution networks of this nature and send those involved in these schemes to prison,” Passaic County sheriff Richard Berdnik said. “The only way of truly reducing the amount of oxycodone on our streets is through comprehensive long-term investigations and prosecutions of this nature.”

Gutierrez as the leader of the ring is also being charged with first-degree charge of promoting organized street crime which carries 10-20 years in prison to be served consecutive to any other underlying offense sentence.

“With operations such as this one, we are attacking the opiate crisis in New Jersey at its source,” Hoffman said.