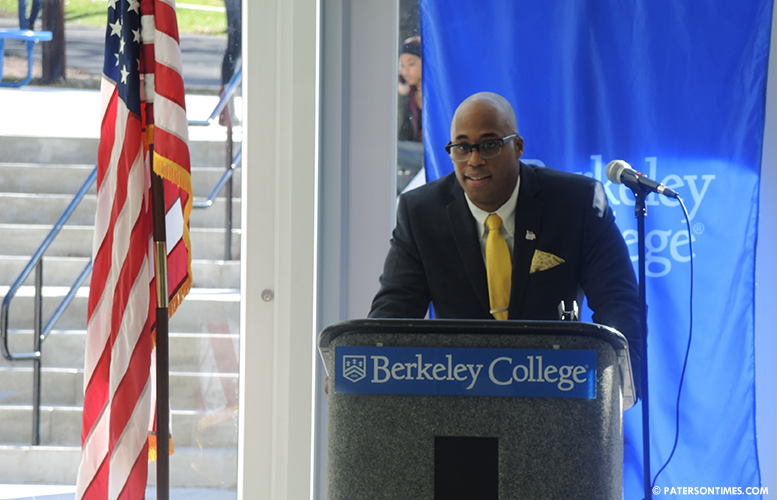 A city veteran who served his country in the American invasion of Iraq is returning to civilian life by earning a bachelor’s degree in neighboring Woodland Park at Berkeley College. Ryan Davenport (pictured), 28-year-old, spent much of his time in the war zone driving trucks for the United States Military.

After the war ended, Davenport returned to his hometown, and began to pursue a degree in Fashion Merchandising and Management with a minor in International Business. He selected a college that has in recent years built a national reputation for welcoming veterans. The college has been ranked 51st out of approximately 100 colleges nationally for having a one of the Best Online Bachelor’s Programs for Veterans by the U.S. News and World Report.

Speaking from his new civilian academic base inside the college’s newly opened Renaissance Hall atrium, Davenport said his service in the military has defined him as a person. The Patersonian described his military experience as the “the most accomplished thing” he’s done so far in his life. He said his experience in the army instilled in him certain key values. “You’re a role model to your community,” Davenport said.

Davenport read out loud the Soldier’s Creed that, despite having left the battlefield, continues to serve as a basic set of principles he lives by. The creed dictates to soldiers that they will always place their military mission first. “I will always place the mission first,” the creed reads. Although no longer in the war zone, Davenport will have a new mission after he graduates in 2016: to secure a civilian business career.

“At Berkeley, we are fortunate to have more than 500 students, as well as faculty and associates throughout our system, who have served in the military,” college’s president Dario Cortes. The college lists a list of recognition it has received for serving veterans like it being named the Best for Vets Four-Year Schools by Military Times magazine and recognized as a Military Friendly School by G.I. Jobs and Military Advanced Education for the fifth consecutive year.

“We are here to help these veteran and military students prepare and be successful in their professional civilian careers,” Cortes said.