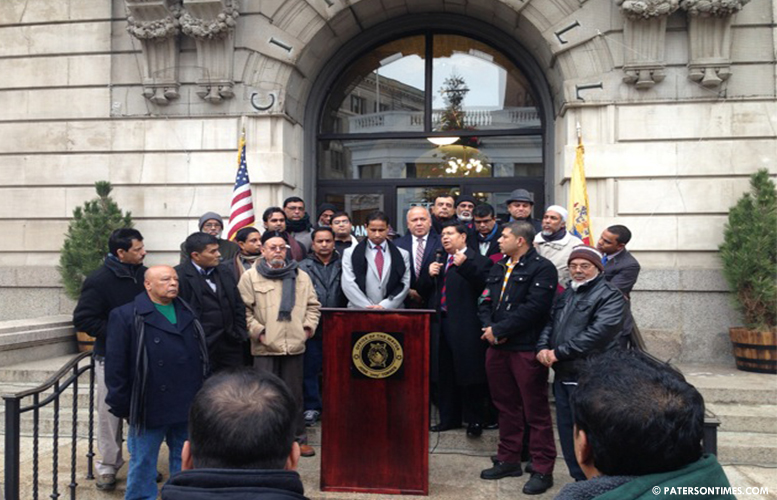 The city’s Bangladeshi-American community gathered in front of the City Hall on Tuesday afternoon to mark the 43rd anniversary of Bangladesh’s triumph over Pakistan in a nine-month long war that consumed three million lives, ultimately resulting in the creation of the South Asian nation.

A small group of mostly community leaders and elders held a brief moment of silence to honor those who perished during that civil war before hoisting the red and green flag. The red disk in the flag’s center represents the blood of those who died for the country’s independence, as well as the sun rising over Bengal, and the green represents the country’s lush green fields.

“I am very happy and thankful for the opportunity to raise our flag,” President of New Jersey Awami League Abdul Malique said. “This Victory Day is very important to us.”

December 16th is celebrated as Victory Day in Bangladesh marking the date in 1971 when Pakistani forces surrendered to combined Bangladeshi and Indian military might backed by the Soviet Union.

“It gives me satisfaction to share with the citizens of Paterson the glimpse and the beauty and the importance of the beloved Bangladeshi homeland to generations of Bengalis here in Paterson,” Mayor Jose “Joey” Torres said.

Introduced as a “friend of the Bangladeshi community,” Torres presided over the ceremony that was attended by the United Nations Ambassador of Bangladesh Abulkalam Abdul Momen. Torres said the city embraces the Bangladeshi culture referencing a soon-to-be-built Shaheed Minar in Westside Park.

Among the small group were few who lost loved ones in the war and others who fought in the struggle. Some wept at the ceremony as the flag hung overhead.

The civil war between the two wings of Pakistan, West Pakistan (now Pakistan) and East Pakistan (now Bangladesh), began in 1970 following the unified country’s first democratic election that resulted in the east winning a majority in the country’s parliament. West found it difficult to accept the eastern wing’s new political might refusing to open parliament. Unrest followed in the east with protesters demanding the country respect the election that shifted political power from the west to the east.

The west’s military dictator Agha Muhammad Yahya Khan instituted martial law in the east to suppress the protests to no avail. Khan’s attempt to quell unrest spiraled out of control leading to a full-fledged civil war between the two wings ending with an independent Bangladesh.

“We will continue to work together so we can continue to not only boast your many contributions, but incorporate your culture and your diversity into our great city of Paterson,” Torres said.

The city boasts the second largest Bangladeshi population in the United States after New York City. In 2012 the growing community successfully elected Mohammed Akhtaruzzaman, the first Bangladeshi councilman to the city council.

“It is a happy day for us,” Malique said.