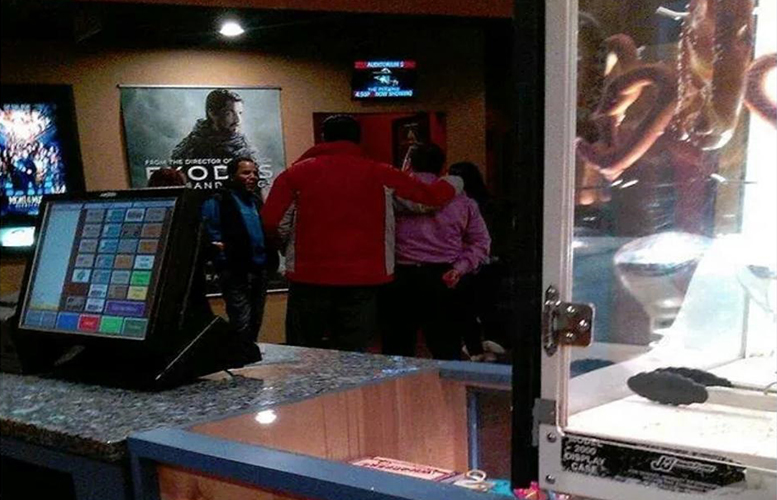 An employee of Fabian 8 Cinema who snapped a picture of two council members at a movie outing with their wives was fired from his job on Sunday.

Rivera posted the image on his Facebook page from which another user poached the image, captioned it “Girls night out,” and began circulating it. Rivera unsuccessfully attempted to remove the image by contacting the user, who was behind the caption.

The controversial Facebook posting that subsequently resulted in the firing of Nicholas Rivera.

Tom Arnold, the theater’s manager, came across the satirically captioned image. He called Rivera into his office and terminated his employment with the theater. Arnold asked Rivera whether he was behind the caption and the image, according to Rivera’s comment on the social networking site. Rivera told the manager he snapped the picture, but the caption was not his doing.

“It was not me who had posted that distasteful comment,” Rivera wrote in an explanation that was posted on his page on Wednesday.

Rivera did not respond to phone messages seeking his comments for this story.

Activists say Sayegh called Arnold and told him to fire Rivera; however, the councilman said that is “totally incorrect.”

“Why would a public official go out of his way and get someone fired?” asked city activist David Gilmore.

Sayegh said he had “absolutely nothing” to do with Rivera’s termination.

Gilmore and a small group of activists held a protest at the theater on Thursday afternoon. Gilmore called the firing unjust and unfair.

Sayegh and Tavarez were at the theater with their wives to watch the Exodus: Gods and Kings on Sunday. After having watched the film, the council members and their families were exiting the theater, at which point Arnold approached to inform them that a picture of them was being circulated on social media.

Arnold told the council members he took action to terminate the employee responsible for the image.

Neither knew a picture was being circulated, said Sayegh. He also did not know, who the terminated employee was.

“We didn’t even know who it was. Yesterday was the first time I heard the young man’s name,” said Sayegh.

Rivera was fired during a racially tumultuous week in the city, when officials were squabbling over, who becomes the city’s deputy clerk: an African-American or a Hispanic-American.

Gilmore, citing a week that local leaders compared to the dark days of the 1960s, said city officials call for diversity yet in this case a Hispanic employee was fired – a city resident lost his job.

The protest outside the theater today was attended by mostly African-Americans fighting for what they see as wrongful firing of a Patersonian irrespective of race, said Gilmore.

Rivera wrote on his page that Arnold did not investigate the matter before firing him. Arnold is said to have told Rivera that it was “not about politics” during the termination meeting. Rivera, who frequents city council meetings, has been active in city politics.

The idealistic 19-year-old on Tuesday gave a brief speech before the council highlighting the struggles of city youths to the applause and praise of council members.

“I do believe politics played a role, and I do believe there is more than is actually seen,” wrote Rivera.

The theater’s policy prohibits employees from using their phones while at work, according to an employee of the cinema. Rivera, by using his phone, violated that policy.

“It was taking of their picture that started this mess,” said Gilmore. He said the council members can tell Arnold: “Don’t use us as an excuse to fire this kid.”

Arnold did not respond to messages seeking his comments for this story.

“I did take the photo out of innocence to show that our local officials do support local businesses,” Rivera wrote on his page.