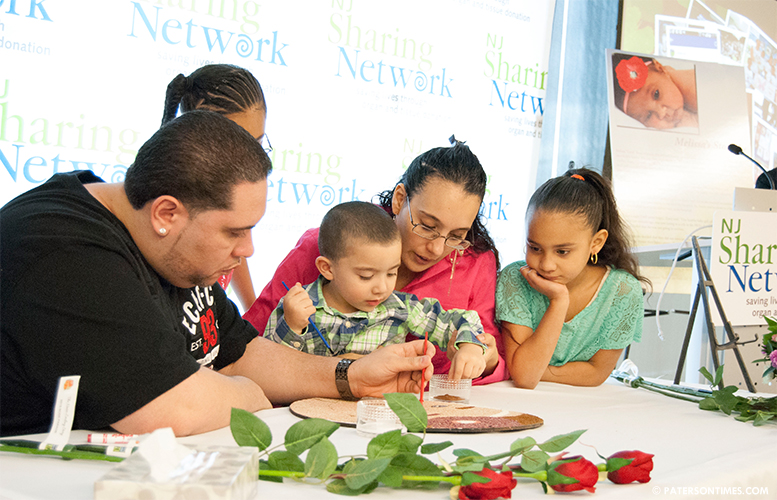 The city infant who saved two lives with her organs will be celebrated with a “floragraph” emblazoned on the Donate Life float at the New Year’s Day Rose Parade in Pasadena, California.

Parents of the girl Katty and Angel Mercado, ringed by their other children Meri, Shayla and Angel, last week completed a floragraph for Melissa Bena, the six-week old infant. The floragraph depicting the infant with flowers, seeds, and other materials will be one of 72 on the float honoring organ donors who save lives by donating organs and tissues.

“When we were first approached at the hospital, I didn’t want another mother to cry like I cried,” Katty Mercado, the girl’s mother, said. “I did not want to see another family suffer like mine did. I wanted somebody else to be saved.”

A transplant coordinator for the New Jersey Sharing Network Rodger Davenport who approached the family said he was awed at the family’s willingness to donate the infant’s organs to give others in need of organs a living chance. “The amount of strength that this family possessed,” Davenport said, “I was in awe.”

Melissa’s kidney saved the life of a mother and her heart saved a three-month old boy. Nicknamed butterfly the baby died on March 7, 2013 in St. Joseph’s Regional Medical Center from injuries sustained in a car accident on Route 80.

Since then the Mercados have been doing volunteer work from cleaning up local parks to being ambassador of the network. “My volunteer work and being part of NJ Sharing Network has helped us dry the tears,” Katty said. “Not all of them, but some of them.”

“The Mercado family members have become ambassadors sharing their story to inspire others,” Joe Roth, president of the network, said. Roth said the Mercados have been spreading the message that donating organs save lives in schools, hospitals, and around the community.

“The Mercado family will be in the parade grandstand and they will be able to see the floragraph of Melissa as their beautiful girl shares her story with the world,” Executive Director of the network Elisse Glennon, said.

“When I go to Pasadena,” the mother said. “I will let not just my butterfly go, but thousands of other butterflies who have saved lives as well.”

The mother’s trip will be sponsored by the New Providence based network that’s been saving lives by connecting donors with those in need of vital organs since 1987. Mercados are one of four New Jersey families traveling to the Rose Parade in California.