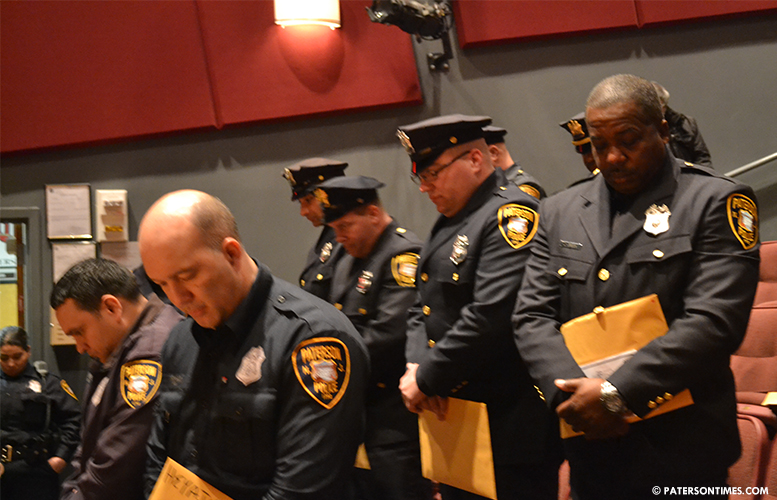 City officials recognized 84 police officers with medals on Wednesday evening for displaying bravery and courage while on duty.

“There was a crowd in front of a bar. There seemed to be a fight going on. He saw a man with a loaded weapon. He lost sight of the man in the crowd for a moment, but continued to disperse the group while awaiting other units to respond.” read police chief William Fraher describing a harrowing incident that unfolded on Main Street on January 1st, 2014, when police officer Muhammed Karasekreter, having finished his duty, was returning home. “The man he had seen moments earlier then emerged from the crowd and was pointing a handgun in officer Karasekreter’s direction. Looking directly at the officer the man began firing his weapon.”

Karasekreter instinctively returned fire while remaining cool, said Fraher. “[He] was able to maintain control of the situation under tremendous stress and facing enormous danger,” said the chief.

Karasekreter was recognized with a police medal of honor for his “intrepidity.” He received the highest award given out during the ceremony held inside the Passaic County Community College theater.

He was driving after having finished work, said Alex Cruz, president of Policemen’s Benevolent Association Local One, police union. He did not have to stop, but he did, said the union president.

“He stopped and he actually intervened where there was an altercation — unbeknownst to him this guy [the suspect] was actually trying to kill him,” said Cruz. “He was eight-feet away from this officer. We don’t run away from a threat, and a lot of our officers demonstrate this every day.”

A large number of officers were recognized for not running away from threats. Fraher related another incident involving detective Russell Curving, sergeant Anthony Hyatt, and Passaic County Prosecutor’s Office detective Richard Ferreira, all three of whom, were ambushed while conducting surveillance on North Main Street near Bergen Street.

“The suspect approached their vehicle and fired a weapon at them,” said Fraher. Hyatt fired back at the suspect. Other units responded and officers setup a perimeter in the area. Police chased the suspect until officer Richard Klein found the suspect, held him at gunpoint, until officer James DiPiazza arrived to cuff him.

Curving, Hyatt, Ferreira, DiPiazza, and Klein were recognized with medal of valor. Sergeant was also included. Each of the six officers received a medal of valor.

“Gee reached into the cell, was able to remove the shirt from the prisoner’s neck,” said Fraher. Gee’s actions prevented a tragedy, said the chief.

32 additional officers were recognized with the medal of merit; 57 officers received letters of commendation. Most of the officers received recognitions for taking guns off the streets from violent offenders, while risking their own lives.

“These are difficult times we live in,” said congressman Bill Pascrell. “I’m glad I could make it tonight.”

Pascrell alluded to the dangers policemen and women face every day while on duty. His remark referenced a foiled plot by an Ohio man to bomb the United States Capitol and carry out a massacre in the nation’s capital.

“The events of the past two months have brought home, for the public at large, how dangerous it is to be a police officer whether you’re sitting in a radio car in Brooklyn or you’re guarding a building in Paris, France,” said Fraher. “This is not an easy job it takes a special type of person to do it and it takes even more a special person to do it well.”

Speaking mostly to police officers and their families, mayor Jose “Joey” Torres also mentioned the inherent risks in being a police officer. “Police officers are faced with walking a very delicate balance between preserving freedoms and confronting those who seek to undermine the values and principles that make our society unique and special,” said Torres, mentioning the tragic death of two New York City police officers.

Passaic County prosecutor Camila Valdes, who has been traveling the state as the head of the study commission on violence, said the city’s police force serves as a model for other towns. “Everywhere I go the work of the Paterson Police Department is the model by which state law enforcement efforts are patterned after,” said Valdes.

Police director Jerry Speziale hoped for more residents to attend the ceremony to hear the tales of the dangers police officers face while on duty.

The ceremony was a way to honor the work of city police officers. Fraher said he was “ashamed” for not recognizing officers for the past five years. He said the city began, what is likely to be an annual event, last year by awarding courageous officers.

“You are the ones who stand between us and the barbarians,” said councilman William McKoy, 3rd Ward, delivering the closing remarks. “We depend on you to keep us safe.”