City officials approved the creation of a new historic district centered around the Passaic County Courthouse building on Hamilton Street.

The Courthouse Historic District includes not just the magnificent courthouse built in 1898 in the Classical Revival style, but also other architecturally riveting buildings such as the former Paterson Central High School, erected in 1909; and the Courthouse Annex, constructed in 1895 as a United States Postal Service office. 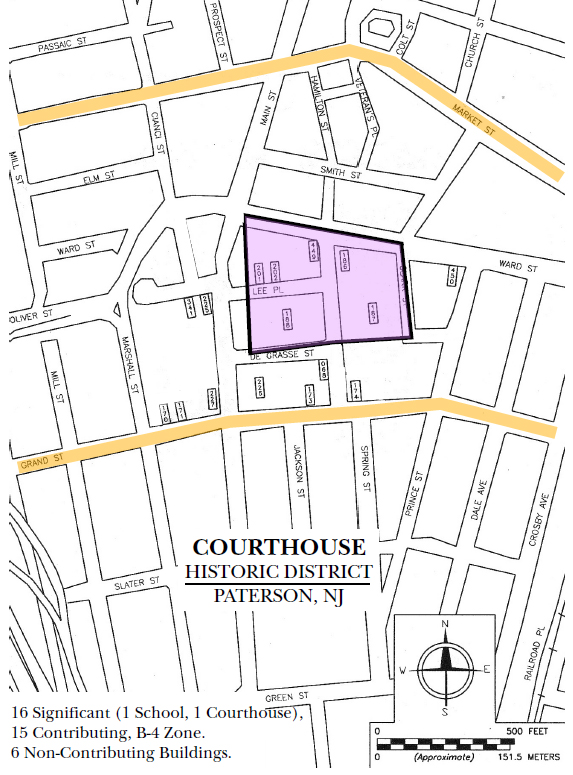 Map showing the boundaries of the Courthouse Historic District in black outlines.

City records show the district was first curved out in a 1987 architectural survey, went through boundary revision in 1996, and was at last included in the city’s master plan last year. The 1996 district boundaries included the Cathedral of St. John the Baptist, put up in 1865, but was excluded from the new district prior to final approval. The much reduced district contains 17 properties, according to documents.

One of those properties, the annex, was designated a municipal landmark in 1991. Designed by New York City architect Samuel Burrage Reed, the courthouse is eligible for listing on the national historic places register – the county planning department is presently working with an architectural firm to prepare and submit nomination documents to the United States Department of the Interior’s National Park Service which administers the register.

The newly created district will help preserve the city’s historic treasures by preventing intentional demolition of important landmarks as has happened when the county constructed the Passaic County Administration Building on Grand Street after demolishing two historic buildings, Third Presbyterian Church and the Second Empire-style house.

The building “introduced a dominating and visually incompatible structure adjacent to the historic district” that is visible from Route 80, states the 1996 survey calling for the designation. Preservation officials also lament the continuous expansion of the unsightly Passaic County Jail.

With historic district designation the commission will be able to protect the buildings within the district, which sits between Ward and De Grasse Streets from north to south and Clark and Main Streets from east to west, from further destruction.