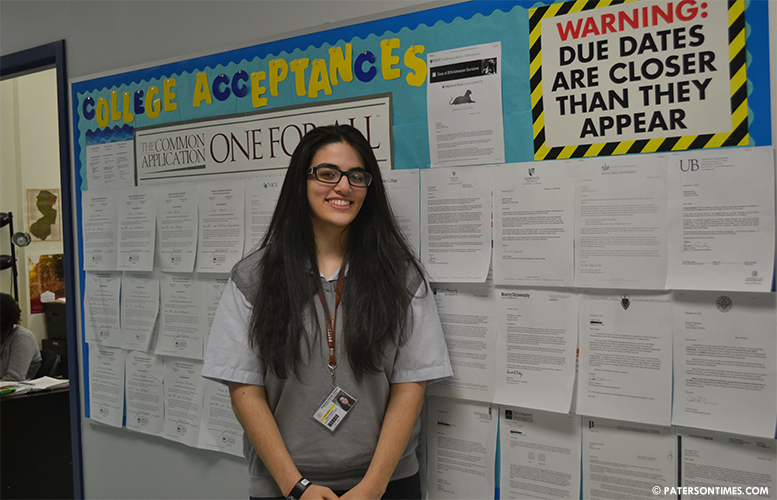 When Sera Gorucu visited the Princeton University website to check the status of her college application the page took its time to appear. Suspense and anxiety pervaded her being as she waited for the page to load, then suddenly an orange tiger, the prestigious university’s mascot, materialized on the screen.

Accompanying the tiger was a “Congratulations!” recalled Gorucu, a student at the Paterson Charter School for Science and Technology. “My sister actually screamed,” recollected Gorucu, after she showed the computer screen to her sole sibling.

The howl roused their father a Turkish-American immigrant, who did not quite perceive the importance of being accepted to one of the top colleges in the country, but he too was as excited and proud of his daughter.

Gorucu said they then visited her mother’s workplace to inform her of the news. “She was really excited when she saw the acceptance,” said Gorucu, 17-year-old.

The excitement did not end there, Gorucu also informed her teachers most of whom praised her. “Everyone said they weren’t surprised,” she said.

“I was just ecstatic and we celebrated,” said Amanda Leach, when asked what her reaction was after receiving the news. When asked what form the celebration took, Leach said: “Oh we jumped up and down.”

Leach, a social studies teacher, said she has known Gorucu since 7th grade. “She just immediately stood out as an intellectually curious young woman,” said Leach. “She always excelled.”

Gorucu’s Scholastic Aptitude Test (SAT) and grade-point-average (GPA) says as much. She obtained a 2100 SAT score and a 4.55 GPA, highest possible at the school. Gorucu said she sat for the exam twice and also took three subjects tests, each once: mathematics, chemistry, and history.

Besides studying hard for exams, she played an active role in school activities. Gorucu is involved in the school’s student council, she serves as vice-president. She is also involved in a number of school clubs: Yoga Club, Multicultural Club, Embrace Club, 4H Club, and the World is Our Classroom Club.

The last one has taken her to three foreign countries. She was able to visit Costa Rica, Greece, and Italy during two spring breaks in the past years, said Leach, who traveled with Gorucu. During her one-week trip to Greece and Italy she toured a number of ancient ruins. Gorucu said she visited the Coliseum, Zeus’ Temple, the Acropolis, Pompeii, and went on a tour of the Vatican.

“It was pretty cool. We got to see all the places we studied in history class,” said Gorucu, who participated in the school’s history and science fairs. “We went to Vatican City and took a tour of the Sistine Chapel.”

“In every place we went she just soaked up knowledge,” said Leach, who crafted Gorucu’s recommendation for the Ivy League college.

Leach said she was not surprised that Gorucu, who volunteered for canned food drives and  taught science to lower grade students at a library, was accepted. She said the student is known for giving her 110-percent to every task she undertakes.

“She’s going to do great in Princeton,” said Leach. She said Gorucu is her first student to receive acceptance to an Ivy League college.

“She was one of those students who had it altogether,” said Patricia Stephenson, guidance counselor at the school.

When asked what her response was when Gorucu wanted to apply to one of the most selective colleges in the country, Stephenson said: “That’s what’s expected of you.”

Stephenson said the k-12 school, established in 2002, begins preparing students for college from the time they are in the 6th grade. She said coaching is provided to encourage students to apply to selective institutions.

Gurcanli said majority of the pupils at the school, like Gorucu, are first-generation students. “They don’t have that experience of visiting colleges,” said Gurcanli. He said so the school brings the colleges to its campus. Every year, the school invites colleges to issue instant decisions after reviewing transcripts and interviewing students.

In recent months, the city’s school district – which does not include charter schools — has been battered for poorly preparing students for college. Out of 594 students, who took the SAT, only 19 were deemed college ready – obtained a score of 1550 or higher.

Gorucu, who was born in the city and lives in the 6th Ward, said being a city resident helps as colleges attempt to build more diverse student bodies by recruiting minorities.

“I never have any shame from being from Paterson because you can always make your own future and you can decide where you want to go,” said Gorucu. “As long as you work hard enough you can get anywhere you want. And that’s the same for any kid in Paterson.”