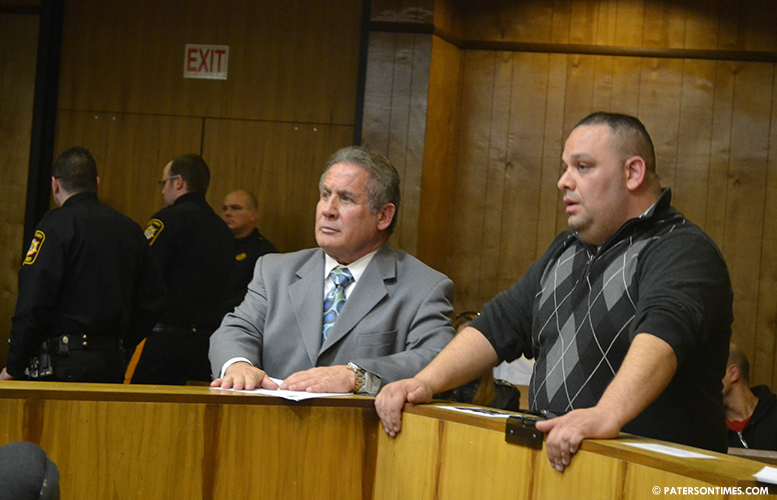 One of the two former city auxiliary police officers who was involved in a 2012 incident on North 1st Street that led to the death of a Garfield man was sentenced to 18-month in state prison on Friday afternoon.

Superior Court judge Adam Jacobs issued a five-year sentence for Juan Martinez with 18-month to be served in state prison without parole eligibility at the recommendation of the prosecutor’s office. Martinez (pictured, right with attorney La Forge, left) pled guilty to conspiracy to commit official misconduct.

“It’s a felony,” interjected the judge.

La Forge said Martinez’s only crime was not reporting the accident that took place on April 17th, 2012. Martinez and another auxiliary police officer Jonathan Lopez, both volunteers, activated the siren of their city vehicle while following a motorcycle from 100 feet away driven by Randolph Waddy IV, which led to an accident that claimed Waddy’s life.

“Out of fear he did not report it, that’s what my client did wrong,” said La Forge. He said Martinez knows what he did was wrong and he should have reported the incident to authorities.

“When that tragic crash happened they left him on the street dying,” said Paul DeGroot, assistant prosecutor at the Passaic County Prosecutor’s Office. He said the two realized the victim was hurt, but left the scene with little intention of reporting it to police.

“When they got back there’s evidence they tried to cover it up by indicating the radio was broken or not working,” said DeGroot.

“All I want from Mr. Martinez is justice. Yes I worked with you. And I’d have never thought you would ever leave my son there to die. You didn’t render any aid to him,” wrote Francine Warren, the deceased’s mother.

Warren, who is battling breast cancer, was unable to make it to the court hearing which was scheduled for 1:30 p.m., but did not begin until 3:10 p.m.

“Every time I ride down North 1st Street, I see that light, and I see my son in the ambulance fighting for his life,” wrote Warren in her letter read out loud by Manual Gilbert, pastor. “No one knows the hurt and the pain I feel. Although it has been almost three years, it seems to me like it happened just yesterday.”

Outside the judge’s chamber were three dozen supporters of the family, who waited almost two hours to witness the sentencing. The large number of supporters in the hall resulted in increased security presence inside the chamber when the proceeding began with the supporters filling half of the chamber.

Jacobs granted the supporters opportunities to speak before the court.

“To hear a lawyer belittle my nephew’s life like it was nothing, like the crime was nothing, hurt my heart,” said Lavina Johnson. “I never thought I would live in a society where a man’s worth could be judged so little.”

Johnson said Waddy was taking care of his family as well as assisting others in need. She mentioned Waddy’s response to a storm during which he distributed batteries and things to impacted city residents despite living in Garfield.

“We found it disrespectful for the lawyer to say he [Martinez] had aspirations, hopes, and all those hopes have been ruined, and he will never be able to become a police officer,” said Randolph Waddy, senior, the father.

La Forge had said Martinez, 12-year veteran at the auxiliary police unit, was just one day away from becoming a police officer at the city’s police department.

The father, well-known as Hamzah Abdas-Salaam, an imam at the Masjid Ansar Al Sunnah on Washington Street, spoke in broken voice: “My son can’t come back to life ever again.”

Jammie Rogers, girlfriend to Waddy, said the two have been in a relationship for more than a decade. Waddy helped her raise a child and the two had intentions of marrying. “We had dreams of getting married one day,” said Rogers, almost in tears. “I been crying for three years.”

Speaking after Waddy’s grief-stricken family and relatives, Martinez apologized to the family. “It wasn’t my intention. I know the pain they are going through. I know they’re suffering,” said Martinez. “I can’t even sleep. I think about this every night. I made a mistake – a big mistake.”