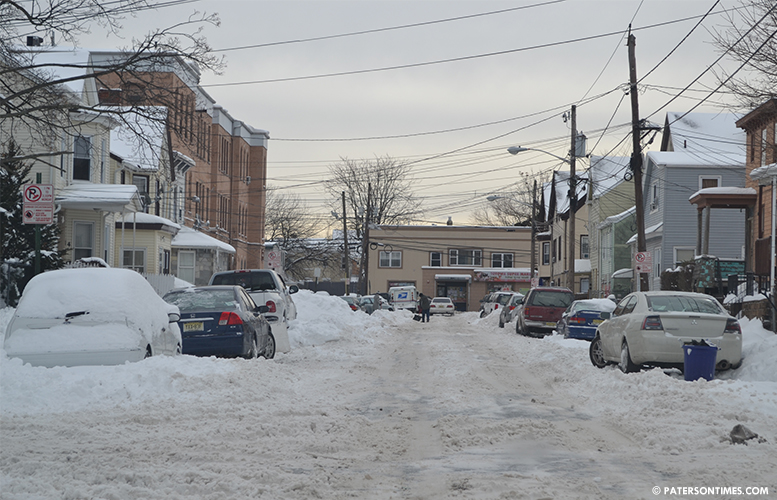 The snow storm that dumped almost a foot of snow in much of New Jersey has left many city side streets impassable due to residents’ proclivity to shovel snow into plowed streets, and frigid overnight temperatures that rendered salt ineffective.

“It’s hard to clean ice,” said mayor Jose “Joey” Torres. “One of the hardest thing to do is deal with frost conditions during snow removal because it just becomes an ice cap.”

Torres said public works crew have been working around the clock since 9 p.m. on Sunday. “We were out there last night again salting,” said Torres.

He said the temperature last night was 11-degrees Fahrenheit rendering salt ineffective. “Where you see the bulk of the icy condition is as a result of residents throwing snow back into the streets,” said Torres.

“Some of the streets are really bad,” said Mohammed Akhtaruzzaman, 2nd Ward councilman. “I drove by. They did some of the streets, but the problem is you could see snow on the surface level but underneath it is a lot of ice.”

Akhtaruzzaman said he has contacted Steve Howe, assistant public works director, who is filling in for Manuel Ojeda, who is on sick leave, with a list of streets that require attention. 1st Ward councilman James Staton said he is seeing progress on the streets.

“I see some streets weren’t done, but I see them working,” said Staton. “I saw the trucks on the streets so they are out here.”

He said some streets like North Main Streets have been salted and as the frigid temperature lifted the snow melted away. Staton, who said residents throwing snow back into the street is hampering city work, said many of the major arteries in his ward have been cleared of slush and snow.

“They need to clean it,” said Danny Lewis, who was pulling out a van on East 21st Street near Park Avenue. He said the street was plowed, but it needs more work.

Shelly Edwards, another resident, said the streets were plowed, but that was the end of it.

A number of city streets like Chamberlain Avenue, Bridge Street, North 1st Street, sections of Crosby Avenue, East 23rd Street, and others give the impression they were not salted or plowed leading residents to complain to their council members.

One lane of Chamberlain Avenue is entirely clean while the other is covered in a blanket of snow. Torres said that’s due to residents shoveling snow into the streets.