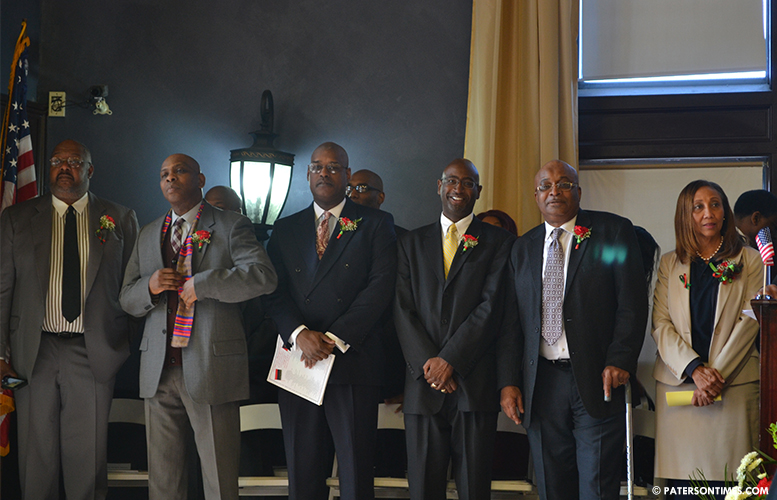 “I think about black history and the struggle our ancestors went through, the hard times they went through, and I always say that no matter what I do in life I hope they are proud of me for what I’ve done,” said Ruby Cotton, 4th Ward councilwoman, who served as the mistress of ceremonies.

Council members expressed their appreciations and a sense of proudness by recognizing four city activists, three educators, a theologian, and a social worker.

Community activists recognized were: David Gilmore with the Medgar Evers award; Dwayne Cox with the Jesse Owens award; Ernest Rucker with the James Forman award; and Gerard Burns with the Ralph Abernathy award.

Psychologist and social worker Kelley Moss-Brown was recognized with the Inez Beverly-Prosser award.

Medley, like Douglass, has been on a crusade to promote literacy in the African-American community. Medley said he was moved to promote literacy after reading a poster inside the abolitionist’s home in Washington D.C. which read: “Once you learn to read, you will be forever free.”

Council president Julio Tavarez, who nominated Medley, was absent from the ceremony. In his place Andre Sayegh, 6th Ward councilman, handed the award to Medley. Tavarez’s absence garnered a strong negative reaction from the audience, when it was announced the council president couldn’t make it. One audience member blurted out: “Not surprised.”

“We take pride in our own African-American men and women who overcame insurmountable obstacles and achieved great success” said mayor Jose “Joey” Torres. Torres listed a number of city residents who went on to overcome racism to obtain success. He listed Larry Doby and Johnny Briggs, both of whom made it to major league baseball by cutting through the color line.

“Change was made when William “Bill” Mason led the Charter Study Commission that changed the form of government to our current Faulkner Act Plan D,” said Torres. Mason was a 4th Ward councilman from 1974-76.

While Torres was reading off his list, William McKoy, 3rd Ward councilman, donned a Nigerian garb, to bring some “authenticity” to the ceremony which began at 11:30 a.m. and continued into the afternoon.

“We don’t do what we do to receive awards,” said Medley, a principal at the Frank Napier Academy, a school named after the city’s first African-American school superintendent. “We do what we do to make life better for others and the awards come as a byproduct.”