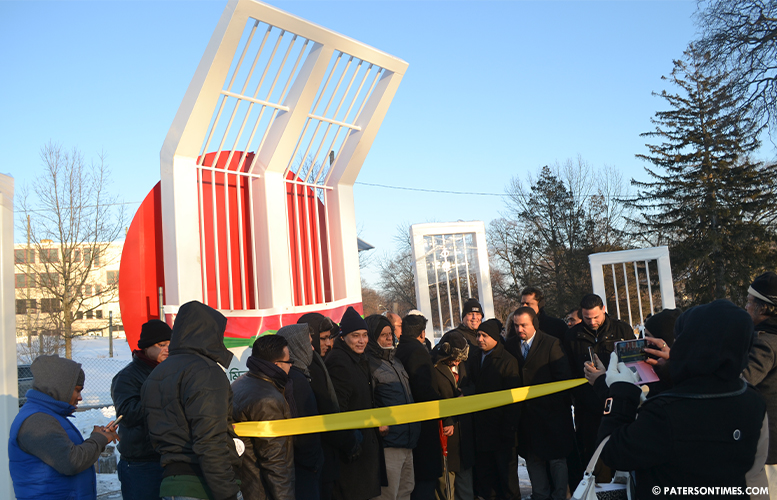 A number of residents from the city’s Bangladeshi-American community braved the subzero cold on Sunday afternoon to attend a ribbon cutting ceremony unveiling a much anticipated Shohid Minar, martyrs’ monument, in Westside Park honoring a band of students who gave their lives to preserve the Bengali language.

“Bangladesh is the only country that fought to speak its language,” said Wahid Azad, one of the founders of World Glam Entertainment, the organization behind the monument. The organization’s president Mohammed J. Ahmed said the monument was his brain child to remember those who perished to allow him and others to continue speaking their native tongue.

It is only because of their sacrifice that we’re speaking our own language today, said Ahmed. Ahmed was referring to a 1952 incident in which West Pakistan, now Pakistan, attempted to impose Urdu as the official language of East Pakistan, now Bangladesh. Both nations, now separate, were joined in a federation on the basis of a common religion.

The speakers of Bangla would have none of it organizing a protest on February 21st, 1952. Students from Dhaka University and other colleges began to demonstrate against the West Pakistani government’s move to impose Urdu.

The Pakistani authorities placed a limit on freedom of assembly to curb protest at the defiance of the students. Events escalated resulting in police firing on the protesters. The slain were honored through a monument constructed by a group of students: the original Shohid Minar which was destroyed by authorities three days later.

“This day has a special relation with our country,” said Shameem Ahsan, consul general of Bangladesh in New York City, of February 21st. “In 1952 our brave sons sacrificed their own lives for the protection of their mother tongue.”

Ahsan said the world recognizes their sacrifice in its observation of the International Mother Language Day.

Despite the international recognition, Bangladeshi-American youths appear to be forgetting the struggle their ancestors underwent to preserve their language, said Ajmol Ali, a member of the organization.

“They are forgetting their language and their ethnicity,” said Ali. He said the link between ethnicity and history is language which is fast eroding among the new generation of Bangladeshi-Americans.

Ali said at least now with this monument when they walk pass it they may ask someone why such a structure exists here. He is hoping curiosity will encourage future generations to get in touch with their roots.

“This is a reminder,” said Ali.

The construction of this reminder did not come easy, said Ali. “There was a moment when this was not going to happen,” said Maritza Davila, councilwoman at-large.

Indeed, Ali, who resides in nearby Elmwood Park, said there was a great deal of infighting within the Bangladeshi-American community – two factions formed one against and one for the monument.

Ultimately, the faction that was for the monument won out, securing grant funding from the Passaic County Board of Chosen Freeholders with assistance from the New Jersey Community Development Corporation (NJCDC).

“We worked closely to apply for the funding from the county,” said Bob Guarasci, president of the corporation. Guarasci’s organization helped secure $150,000 in open space grant. His organization also assisted in selecting the right companies to design and handle construction of the project.

“We worked to ensure we had the right architect, the right contractor, and we had all of the right people to make sure this wasn’t just an idea on paper, but that it would become something that could be built and stand for all times as testament of the vitality of the Bengali community here in Paterson,” said Guarasci.

“This is the first Shohid Minar which was purely funded by the local government in the United States, that is something very special, it speaks about the warmth and friendship of our American friends for us and our culture,” said Ahsan.

“This not a monument this is our identity,” said Mohammed Akhtaruzzaman, 2nd Ward councilman. “It’s going to stay not for one-year or two-year, but as long as Bengalis exist in the City of Paterson.”

“Language is part of identity, language matters, and I think no nation’s history expresses that quite the same way as Bangladesh’s does,” added John Bartlett, county freeholder.

“I thought why don’t we try to establish a testimony of our nation to the people of United States and to our next generation,” said Ahmed.

Ahmed, who received praise for his tireless work in seeing the monument to its completion, implored community leaders not politicize the monument.