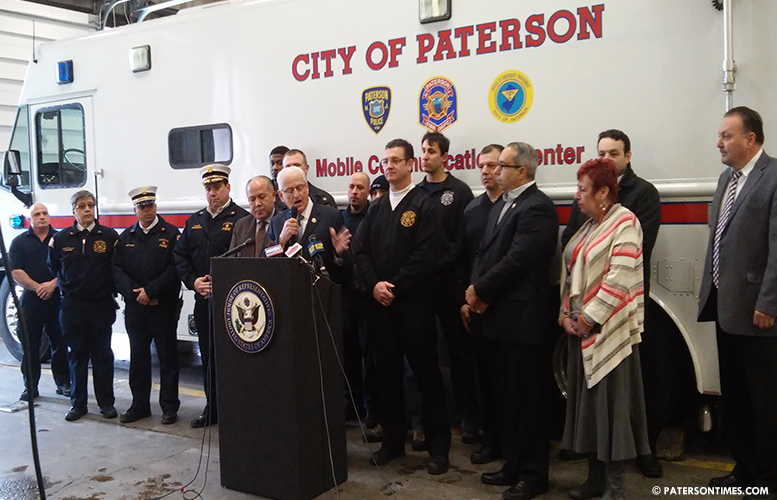 City officials have said $2 million in grant money will be frozen resulting in local emergency appropriations to keep city firefighters working if a shutdown of the United States Department of Homeland Security takes place on Friday.

$1 million in Staffing for Adequate Fire and Emergency Response (SAFER) grant will be frozen in the event of a shutdown, said Michael Postorino, city’s fire chief. The SAFER grant allowed the city to avert a layoff of city firefighters during a budget shortfall few years ago. The grant allows the city to keep its fire department decently staffed.

“These grants are important in ensuring firefighters in Paterson, Passaic, and Clifton have the equipment needed to keep our communities safe regardless of local budget situations,” said congressman Bill Pascrell on Monday morning flanked by fire officials from the three Passaic County cities.

Pascrell said if funding is not approved for the department local towns and cities are likely to suffer grave consequences. “These [local fire] departments will not be able to draw down their grants, they are not going to be able to pay local firefighters on our very streets,” said Pascrell.

“There’s no way we could continue to staff, at a level necessary, the Paterson fire department if it wasn’t because of the SAFER grant that’s provided under the Department of Homeland Security,” said mayor Jose “Joey” Torres.

When faced with $3 million in cuts from the state, Passaic City was able to use federal grant money to retain firefighters and avert layoffs, said mayor Alex Blanco of Passaic.

The three major cities will see a portion of $10 million in grant monies frozen if congress is unable to reach an agreement on the federal department’s budget before the end of this month. Applications for vital emergency equipment could be put on hold.

New Jersey could see $65 million in funding from the department stuck in limbo, said the congressman.

The United States senate is at odds with president Barack Obama’s immigration actions from 2011, 2012, and 2014, so it’s attempting to undermine his actions to protect estimated five-million undocumented immigrants from deportation by holding the homeland security appropriations hostage.

“Local municipalities should not be forced to bear the financial burden resulting from the negligence and callousness of the most extreme elements of the Republican Party,” said Pascrell. “It’s time for Republicans to accept that President Obama’s immigration actions are within his legal authority and finally do what’s right by the American people and our national security by passing a clean funding bill.”