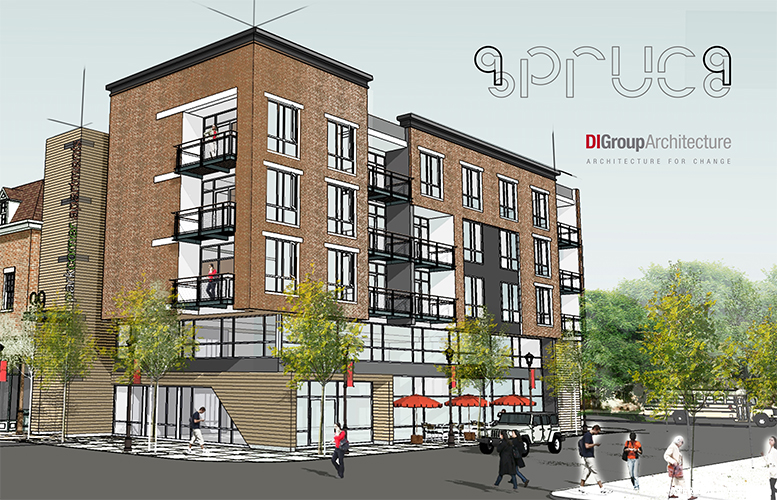 The New Jersey Community Development Corporation (NJCDC) has received board of adjustment approval to construct a $4 million mixed-use building at the site of a former eyesore in the corner of Spruce and Grand Streets.

This is going to be an 11 unit apartment building along with two retail spaces on the ground floor, said Bob Guarasci, president of the organization. The board of adjustment on Thursday evening approved the four-story construction whose top three floors will include residential living space while the bottom floor will feature two retail spaces, one of which will potentially house a café.

Rundown structure that stood at the corner of Spruce and Grand Streets before NJCDC took over the site.

“This will not only provide much needed affordable housing, but also help revitalize that very important corner which is the first thing people see when they get off the highway and drive up to the falls,” said Guarasci.

Indeed, the corner, 97 Spruce Street, in which the organization intends to erect the new building served as host to a broken-down structure that was purchased by Guarasci’s non-profit and ultimately demolished in November of 2013 to pave the way for the new project.

Guarasci said the project titled Park Corner Apartments (pictured) will take a year to complete. He said construction will begin in May 2015 and finish in May 2016.

Funding for the project comes from three sources: a $1.5 million United States Department of Housing and Urban Development (HUD) grant from the city, $1.5 million from the Neighborhood Revitalization Tax Credit Program (NRTC), and $1 million from a bank loan, said Guarasci.

Guarasci said the organization, which calls the Great Falls neighborhood its home, is committed to its revitalization. Guarasci spent considerable time cutting through the city’s red-tape to obtain board of adjustment approval.

The organization went before the board on December 22nd, 2014, but only received approval six days ago — three-month after the item first appeared on the board’s agenda.

“We care deeply about this neighborhood,” said Guarasci. “If you look at Spruce Street now from 10 years ago you’ll notice a dramatic difference for the better.”

With this new building at one of the important entrances to the city, Guarasci is hoping to make a dramatic difference in visitors’ perception of the Silk City.