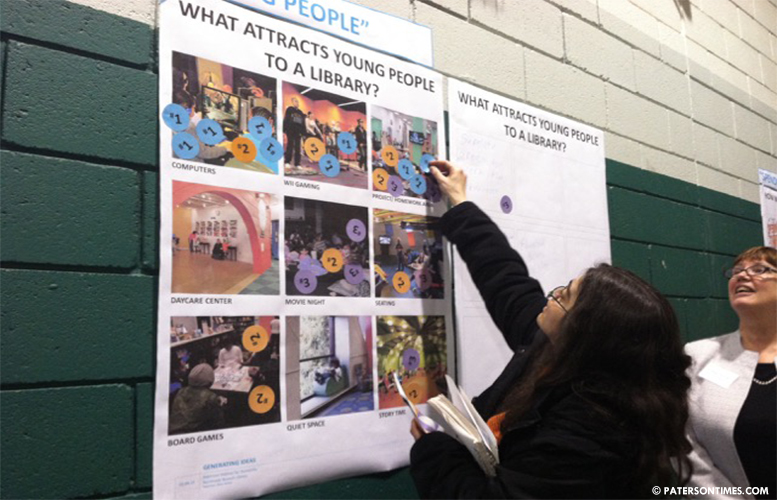 City residents attended a forum hosted by community organizations on Wednesday evening to share their inputs on the library needs of the 1st Ward.

The forum hosted by the Library Feasibility Steering Committee, the Paterson Habitat for Humanity, 1st Ward Community Development Corporation, and the Paterson Library was designed to gauge the library needs of the city’s northern section.

Organizers setup up four pictorial stations with boards on the wall displaying popular library services, activities, programs, and physical aspects. Attendees were given the opportunity to rank their top three choices in each category to show which were most desired for the Northside branch.

There were also blank spaces and post-it pads available for attendees to write in their own suggestions for other attendees to vote on. The first station posed the question, “What services do you want at the library?”  Access to books and media, an area specifically for the youth, and computer access were voted top three in that category respectively.

Residents also had a chance to select having other services like a theater, café, meeting rooms, and access to digital production.

“More books and more technology, and also the theater because some kids are readers but some are more visual learners,” said 1st Ward resident Margaret Padilllo.

1st Ward resident for of 10 years Padilllo said she used to take her son to the now damaged Northside branch of the library, but now she’s forced to go to the Danforth Memorial Library on Broadway.

The second station asked, “What makes the library a welcoming place?” Votes were evenly distributed across aspects such as landscaping, visibility, social activities, and a community gathering space.

A member of the steering committee Davis wants the library to have extended hours and remain open throughout the week. The third station posed the question of what attracts youngsters to the library. Computers, project and homework area, as well as movie nights were selected to attract youths by young attendees.

“I have a concern for the young people in the area,” said 1st Ward resident Samuel Ince. “We have to make it attractive.” Ince believes having update technology is a key ingredient to attract young people to the library.

Ince said security is also important so youngsters see the library as a safe place in a community that experiences a great deal of violence. Much of the violence happens in the city takes place in the volatile 1st and 4th wards.

The fourth and final station asked what aspects of the library would the community members invest most of their money in improving. Attendees were given three stickers to represent money and could choose to invest all their money in one area or spread it across, up to three different areas. The top three choices were to invest in physical space, technology and programs, and activities.

Since the destruction of the Northside branch on North Main Street during Hurricane Irene in 2011, area residents have been served by a small satellite branch inside the Christopher Hope Center.

City library director Cindy Czesak said the small branch has four computers, 4,000 books, and a capacity to host 12 visitors. “The activity level is the same as a building that is twice as big with two times the resources,” said Czesak.

Many including city resident Tracy Pearson have been complaining publicly that Northside residents need a fully service branch in their part of the town.

City library director Cindy Czesak said $250,000 in insurance money remains from the unsalvageable 56 North Main Street building that was damaged by flood waters. With increasing activity at the satellite branch community organizations and the library system is attempting to figure out how to address area residents’ library needs.

The decision whether to operate out of a new space or just expand the services available at the current space is still being made as feedback from forum is being put into consideration.