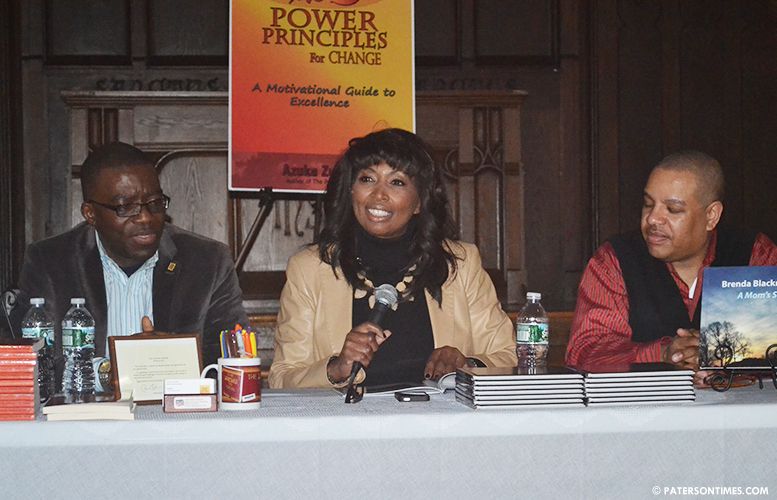 An empowerment event for prospective members of a Parent Teacher Organization (PTO) at the Yes Academy on Friday afternoon brought out multi-Emmy award winning news anchor Brenda Blackmon and motivational speaker Azuka Zuke Obi — all the way from Roselle — to the alternative high school’s campus on Smith Street.

Obi began the event by sharing his story coming out of impoverished Nigeria to the United States by a luck of the draw. He came from a country that had little to offer to its population in education or economic prosperity. Obi (pictured, far left) said his family was so poor he had to walk to school barefoot.

“Growing up in a small village in Nigeria, I thought the whole world was going to collapse on me, it was that difficult,” said Obi. His story serves to highlight the ease with which American children are able to attend high school, universities without having to endure too much hardship; in his case, Obi had to leave his home country in search of opportunities.

Obi managed to escape the hardship of West African life through sheer chance, when president Bill Clinton instituted a Diversity Visa lottery. He said he applied, and was picked. Obi had no money for a plane ticket, but managed to somehow obtain it to purchase a ticket out of Nigeria.

Striking a not too dissimilar note, Blackmon read an excerpt from her book, “A Mom’s Story,” about her daughter Kelly’s battle with Lupus. The daughter discovered she had the autoimmune diseases, where the immune system attacks itself, at the age of 19. Blackmon said the doctors had said the daughter would die. “Can you imagine a doctor telling you, your daughter is going to die?” said Blackmon (pictured, center).

Obi and Blackmon shared their stories at the alternative school attended by about 100 students, mostly students who no longer are able to attend regular high school in the city. “We serve students who are overage and under-credited,” said Tanya Greene, principal of the academy. “We provide that second opportunity for them to graduate successfully with a high school diploma.”

Their stories were meant to inspire and empower parents of the 100 or so students to not lose hope in their children who might have erred here and there, but are on a path towards obtaining their high school diploma.

The message appeared to be that anything is possible. Although the message was there, parents were not. “My goal is to get parents involved, and as you can see we don’t have the outcome,” said Jean Silver, parent-teacher coordinator at the school.

One parent attended the event, but he was there to speak to the principal about his 21-year-old son and when he will graduate. And whether he is on track for graduation. “It is unfortunate we don’t have our parents here to see and witness to this event,” said Greene.

Despite a lack of parental attendance, there were about a dozen people in the audience, mostly school staff, and a community leader.

Silver did not lose heart. She’s hoping in the next event more parents will turn up.

“She just started, not too long ago, two weeks, and she’s brought Brenda Blackmon up here!” praised Kemper McDowell, director of community and family engagement.

McDowell said the purpose of these events is to encourage parents to come out and network with each other. “Sometimes you learn more from sitting next to a parent at a bake sale than you do at a workshop,” he said.