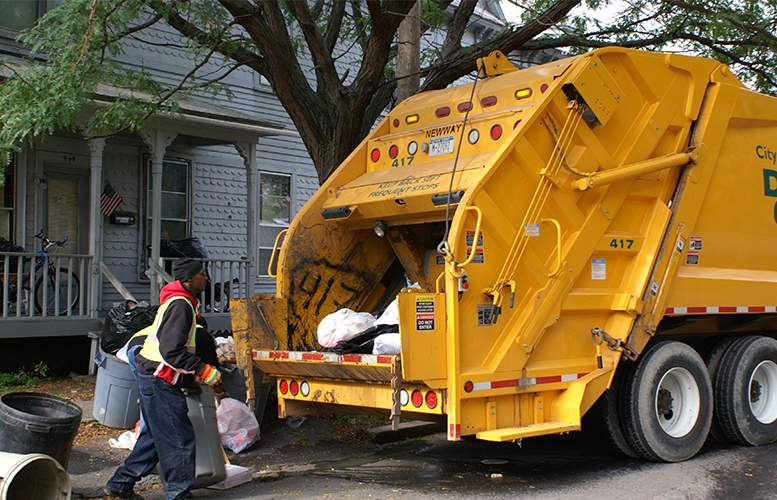 City officials on Tuesday evening pushed for the development of an in-house garbage collection program that will lead to the expansion of the Public Works Department and potentially bring in revenue through shared services agreements with neighboring towns.

“We could do their garbage collection for a fee using the same trucks and the same manpower to generate not only expense for operation, but the income that we currently don’t have,” said William McKoy, 3rd Ward councilman.

McKoy said these towns already rely on the city for a great number of other services, so why not enter into shared services agreements for garbage collection – once the city has a program – that would not only bring in revenue to the city, but also result in savings for surrounding towns.

McKoy and other council members called on the administration to put together a plan that will bring garbage collection in-house. The city currently pays roughly $3.5 million per year to Fairfield-based Suburban Disposal also known as a Roselle for its garbage collection.

“In order for us to have a strong local economy we have use our resources and now we can do business with the rest of the neighboring towns,” added Alex Mendez, councilman at-large.

McKoy said the city should not rely just on a cost-benefit analysis, but look at the much larger impact bringing such a program in-house will have on the municipality.

It’s not always about “dollars and cents,” said McKoy.

“We have a lot of people that are unemployed and underemployed in Paterson who need to be employed,” said McKoy. “When they are unemployed they create more problems for us than we can shake a stick at.”

He said the city needs to focus on creating jobs to make opportunities for its people so residents are not on street corners attempting to eke out a living by distributing pharmaceuticals. “We do need the jobs here,” added Ruby Cotton, 4th Ward councilwoman.

Putting residents to work will address some of the social ills in the city, said McKoy. “We diminish a lot of the problems we have in the city,” said McKoy.

“Even if we increase the cost a couple of hundred thousand dollars, we still create more jobs in Paterson than outsourcing,” said added Mohammed Akhtaruzzaman, 2nd Ward councilman. “I rather stay in-house building than outside.”

Council members appeared to have a desire to reduce the city’s stubbornly high unemployment rate which stands at 10.9-percent while New Jersey’s is almost half that at 6.4-percent, according to the United States Bureau of Labor Statistics.

Launching an in-house program may be more difficult than discussions would suggest. Pou pointed out workers compensation, healthcare, operation, and machinery, all of which is likely to costs the city a great sum of money not just to start the program but to keep it running.

Mayor Jose “Joey” Torres said few years ago the city completed a study that concluded it may not be prudent to bring garbage collection in-house. “The last study didn’t think it was a good deal for our city to undertake those expenditures,” said Torres.

Torres said that was few years ago, so the city will hire a solid waste expert to commission another report to see whether the conditions are favorable to develop an in-house program.

McKoy said the city will generate income from the program by not only picking up garbage from neighboring communities, but also by plowing city roads in the winter. He wants the garbage collection trucks to be equipped plows, so that when trucks are out emptying receptacles they also clean the streets.

Council members want the administration to prepare a report that would layout the cost of developing the program. McKoy wants estimates of the revenue the city could bring in through shared services agreements with surrounding towns, cost of operation, needed equipment, and the savings it will create during winter snow removal.

“We’re in the process of getting the proposal for the analysis,” said Manuel Ojeda, public works director. He said the city is working on hiring a consultant to figure out how it can move forward or whether it should.

“We’re just saying: can we? And how?” said Julio Tavarez, 5th Ward councilman. Tavarez scheduled a meeting in May to discuss a sketch of the plan. He initially wanted to setup a meeting to discuss an overview of the plan or concept, but McKoy said, “We got a year, if you take two or three month to come up with the concept, you’re dead out of the water.”

Akhtaruzzaman said the city ought to survey large cities that have in-house garbage pick-up for inspiration.

McKoy said Jersey City and much smaller Elmwood Park both handle their own garbage pickup. He mentioned the Bergen County municipality, formally East Paterson, has plows attached to its garbage trucks for quick street clean-up during snow events.

McKoy wants specific plans on how to move this forward rather than aimless discussion that leads to nowhere. He said he doesn’t want this to turn into an event where the city wastes time and before anything is complete it’s 2016 and the city has to shell out another $3 million contract to an out-of-town garbage collection company.

“Paying a vendor to come in and take $3 million and walk out of the city does nothing for us. It doesn’t give us any spillover benefit, it doesn’t give any residual benefit to our people, and we lose all the way around.”